Lewis Hamilton completed his 200th Grand Prix in victorious style on Sunday when he claimed a much-needed win for Mercedes to trim Sebastian Vettel's championship lead to seven points. 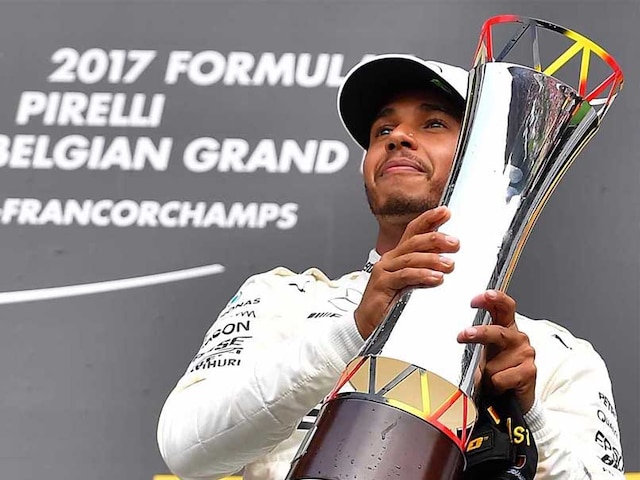 Lewis Hamilton completed his 200th Grand Prix in victorious style on Sunday when he claimed a much-needed win for Mercedes to trim Sebastian Vettel's championship lead to seven points. The 32-year-old Briton made the most of his record-equalling 68th pole position to take the lead, but had to survive some concerted attacks from Vettel's Ferrari before emerging triumphant for the fifth time this season. It was the three-time world champion's third Belgian victory and the 58th of his career, lifting him back into serious contention for the title.

Another victory in next Sunday's Italian Grand Prix could give him the lead for the first time this year.

Four-time champion Vettel came home second ahead of Australian Daniel Ricciardo of Red Bull, Finn Kimi Raikkonen in the second Ferrari and his compatriot Valtteri Bottas in the second Mercedes.

"It's been a strong weekend for myself and the team," said Hamilton.

"Sebastian put up a great fight, but this is what I said I came to do here and so I did it."

"We did a lot better than at Silverstone. And next week is our home race... A good day overall."

After an emotional demonstration lap by Mick Schumacher, 18, to mark the 25th anniversary of his father Michael's maiden victory at the 1992 Belgian race, there was a keen sense of anticipation ahead of the start.

In perfect, if humid conditions, with an air temperature of 22 degrees and the track at 23, and in front of an estimated 125,000 crowd including an 'orange army' of 80,000, Hamilton pulled away from his record-equalling 68th pole position to lead into La Source and resisted Vettel's attack at Eau Rouge.

Hamilton built up an early head of speed.

By lap 10, Hamilton was 1.7 seconds clear of Vettel but behind the luckless Max Verstappen, in the second Red Bull, had been forced to retire with another power failure, his sixth early departure in 12 outings.

There was an almost audible sigh of despair from the massed Dutch fans all around the circuit.

Hamilton pitted after 12 laps in 2.3 seconds and rejoined fourth, passing the race lead to Vettel. Almost immediately, Raikkonen, third, was put under investigation for failing to slow for yellow flags - and was hit with a 10-seconds stop-and-go penalty.

On fresh tyres, Hamilton made short work of passing the Finn and when Vettel pitted, after Bottas had been in, he was swiftly back into the lead.

Vettel resumed in second and after one flying lap cut the Briton's lead to 0.7 seconds. By lap 18, it was back to 1.5 with Bottas third 6.9 adrift.

The two title contenders remained in close contention for several laps until, following another enforced retirement for Fernando Alonso and his powerless McLaren Honda, the Safety Car was deployed on lap 30 following another acrimonious collision between the two Force India cars.

Their crash came when Perez appeared to 'close the door' on his team-mate Ocon as they exited La Source, the Mexican suffering a puncture and Ocon a damaged front wing.

Racing resumed on lap 33, Hamilton streaking away before Vettel stormed back to attack through Eau Rouge and up the hill towards Les Combes - the pair running almost side by side as the stubborn Englishman resisted and kept his lead.

Having survived the re-start, Hamilton rebuilt his lead to 1.6 seconds with eight laps remaining, but team-mate Bottas fell to fifth behind Ricciardo and Raikkonen.

Vettel persevered, closing the gap to a second. "What sector is the faster?" asked an anxious Hamilton, the pair lapping in almost identical times. With four remaining, his lead was 1.170 seconds.

The tension was palpable on Mercedes' foot-twitching pit wall, but Hamilton extended his lead to 1.4 seconds with two laps to go and pulled further clear on his final lap to win by 2.3 seconds.

Nico Hulkenberg finished sixth for Renault with Romain Grosjean of Haas and Felipe Massa of Williams completing the top eight.

(This story has not been edited by NDTV staff and is auto-generated from a syndicated feed.)
Comments
Topics mentioned in this article
Ferrari Mercedes Red Bull Lewis Hamilton Daniel Ricciardo Sebastian Vettel Belgian Grand Prix
Get the latest Cricket news, check out the India cricket schedule, Cricket live score . Like us on Facebook or follow us on Twitter for more sports updates. You can also download the NDTV Cricket app for Android or iOS.