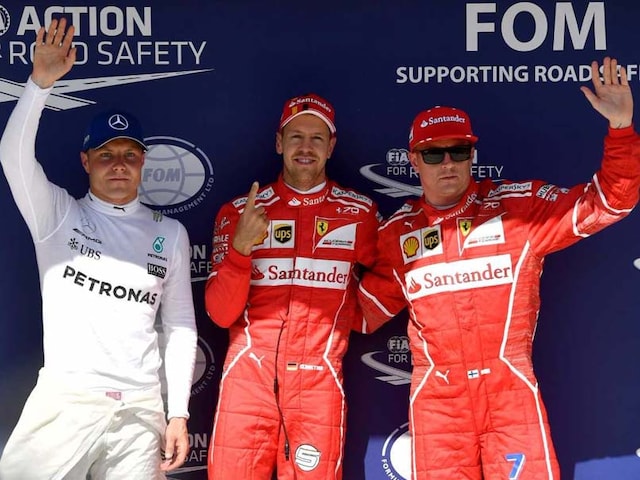 Championship leader Sebastian Vettel grabbed pole position for Sunday's Hungarian Grand Prix as Ferrari locked out the front row of the grid in a tense, dramatic and record-breaking qualifying session on Saturday. The 30-year-old four-time champion clocked a best lap of one minute 16.276 seconds to secure his third pole at the Hungaroring circuit and the 48th of his career. His success gives him a perfect opportunity to make the most of the prime starting position and increase his one point lead over Lewis Hamilton in the standings.

"Yes, yes, grazie tuti (thanks everyone)," screamed german Vettel on his slowdown lap. "The car has been incredible today and I love this track. Front row for us is incredible.

"We're working hard. It is just great. Obviously, the last race wasn't great for us, but we are here now and I am happy where we are as a team."

His Ferrari team-mate Kimi Raikkonen was second fastest and will start alongside Vettel at the front of the grid ahead of the two Mercedes led by Valtteri Bottas, who was third, and three-time champion Briton Hamilton.

Dutchman Max Verstappen was fifth for Red Bull ahead of his Australian team-mate Daniel Ricciardo, with German Nico Hulkenberg seventh for Renault and two-time champion Spaniard Fernando Alonso eighth for McLaren-Honda on his 36th birthday.

Comments
Topics mentioned in this article
Ferrari Mercedes Sebastian Vettel Lewis Hamilton Valtteri Bottas Kimi Raikkonen Hungarian Grand Prix Formula 1
Get the latest Cricket news, check out the India cricket schedule, Cricket live score . Like us on Facebook or follow us on Twitter for more sports updates. You can also download the NDTV Cricket app for Android or iOS.