The 68th pole position for Lewis Hamilton drew him level in the record books with seven-time champion Schumacher. 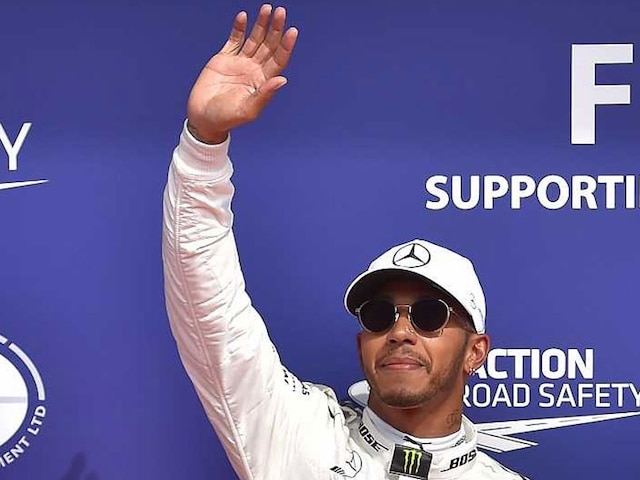 Lewis Hamilton will start Sunday's race, the 200th of his career, from his sixth pole this year.© AFP

Lewis Hamilton roared to a record-equalling 68th career pole position on Saturday, matching Michael Schumacher's record in qualifying for the Belgian Grand Prix. The 32-year-old three-time world champion will start Sunday's race, the 200th of his career, from his sixth pole this year with championship leader German Sebastian Vettel of Ferrari alongside him in second. Hamilton's lap in 1min 42.553sec was the all-time record fastest at the spectacular Spa-Francorchamps circuit in the forests of the Belgian Ardennes, 0.242 seconds quicker than Vettel.

The 68th pole position for the Mercedes driver drew him level in the record books with seven-time champion Schumacher whose congratulations were conveyed to him immediately afterwards by former Ferrari technical director Ross Brawn.

Vettel, who Ferrari said on Saturday has signed a three-year contract extension, secured his front-row spot with a late and dramatic lap for Ferrari.

He leads Hamilton by 14 points with nine races remaining this year.

German Nico Hulkenberg was seventh for Renault ahead of Mexican Sergio Perez and his Force India team-mate Frenchman Esteban Ocon and Briton Jolyon Palmer, who was 10th for Renault after an engine failure.

Comments
Topics mentioned in this article
Ferrari Mercedes Lewis Hamilton Sebastian Vettel Valtteri Bottas Belgian Grand Prix Formula 1
Get the latest Cricket news, check out the India cricket schedule, Cricket live score . Like us on Facebook or follow us on Twitter for more sports updates. You can also download the NDTV Cricket app for Android or iOS.