Lewis Hamilton heaped praise on his Mercedes team after he and team-mate Valtteri Bottas dominated practice ahead of this weekend's Spanish Grand Prix. 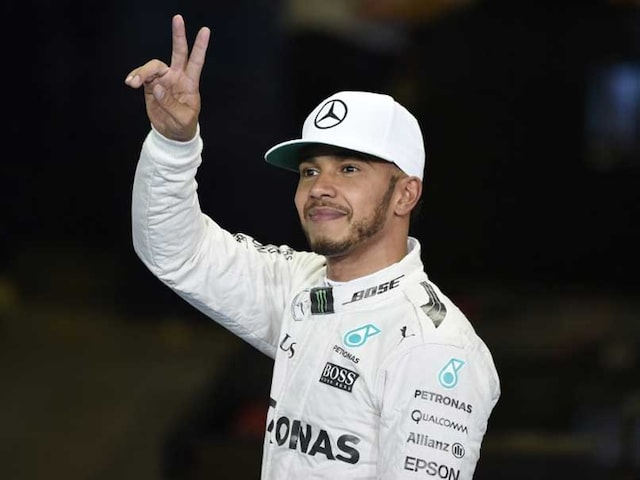 Lewis Hamilton heaped praise on his Mercedes team on Friday after he and team-mate Valtteri Bottas dominated practice ahead of this weekend's Spanish Grand Prix. On a blustery day at the Circuit de Catalunya, the three-time world champion proved he has bounced back from a puzzling loss of pace that left him struggling to fourth in last month's Russian Grand Prix won by Bottas, who claimed his maiden success in Sochi.

Hamilton was fastest in the morning's opening session and topped the second with a best lap in one minute and 20.802 seconds ahead of the Finn by 0.090 seconds.

"They have done an amazing job, the team, with these upgrades and the car is working just as we hoped and expected," said a happy Hamilton after his sizzling show on a cool and cloudy day in the industrial hinterland of Barcelona.

"It's been a much better start to the weekend for me than in Sochi so I'm very happy. Now, we've just got to keep our heads down and keep working. We want to be number one."

Finn Kimi Raikkonen was third for Ferrari, three-tenths off the pace, ahead of his team-mate and championship leader four-time champion German Sebastian Vettel.

Vettel said: "I'm not happy... I'm struggling a bit to find the rhythm, and a bit with the conditions, probably more myself than the car.

"I didn't get everything together. I wasn't too happy, but I can feel the car is quick so that is good. I'm not worried, I'm just not happy with how the day went.

"I wasn't always feeling like I was captain on-board. Sometimes somebody else was steering my ship!

"I hope tomorrow, whoever that was, will disappear...."

All of the leading teams introduced a raft of upgrades for their cars for the first round of the 'European' season following the opening four 'flyaway' rounds of the championship in Melbourne, Shanghai, Bahrain and Sochi, but it was clear that Mercedes had regained the initiative in the windy conditions on medium and soft tyres.

Bottas, who could emerge as an unexpectedly serious contender for the drivers' title if he can outpace Hamilton again, was equally satisfied.

"Today was an important one for us with the new upgrade package on the car," he said. "Our target was to evaluate if the new upgrades are working well and it seems like they are.

"I really enjoyed it out there so I hope we can squeeze more performance out of the package."

The 19-year-old driver praised his team for their new package. "I think we made a good step forward," he said.

"We are a little closer to Ferrari and Mercedes brought a very good update so I think they are still ahead, but it was a positive day."

German Nico Hulkenberg was seventh for Renault ahead of his team-mate Briton Jolyon Palmer, Brazilian Felipe Massa of Williams and Spaniard Carlos Sainz of Toro Rosso.

Two-time champion and local hero Spaniard Fernando Alonso missed the entire morning session after an engine failure before he had completed a single lap, but he emerged 30 minutes into the second session to give his fans something to cheer on his way to winding up down in 20th and last sport.

His McLaren-Honda team-mate Stoffel Vandoorne was 13th quickest, as the team, like the rest, spent much of the day evaluating the performance of their many updated parts.

Many drivers had unscheduled off-circuit excursions including Vettel, Verstappen, Bottas and Grosjean. "Very tricky conditions today," said Raikkonen. "Slippery and not so easy..."

Vettel added: "Today was quite a shocker, if you look at the long runs... I think everyone was struggling."

Comments
Topics mentioned in this article
Mercedes Lewis Hamilton Valtteri Bottas Spanish Grand Prix
Get the latest Cricket news, check out the India cricket schedule, Cricket live score . Like us on Facebook or follow us on Twitter for more sports updates. You can also download the NDTV Cricket app for Android or iOS.