Valtteri Bottas' lap was comfortably faster than Nico Rosberg's pole time last year of 1:29.493, but the overall speed of the new era 'fatter-and-faster' machines was less notable in the desert heat than it had been at the two previous races. 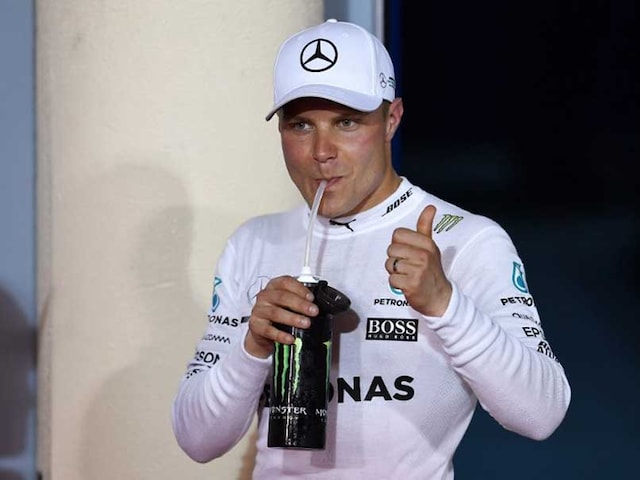 Valtteri Bottas is all smiles after grabbing his first career pole.© AFP

A cool, calm and collected Valtteri Bottas claimed his first pole position on Saturday when he beat his Mercedes team-mate Lewis Hamilton with a well-controlled fastest lap in qualifying for the Bahrain Grand Prix. The 26-year-old Finn, who joined the team as replacement for retired 2016 world champion Nico Rosberg, made the most of a less competitive final lap by the Briton to claim the prime starting position for Sunday's race. Bottas clocked a best lap of one minute and 28.769 seconds in the final seconds and it was, as Hamilton admitted, too good for him to beat. Hamilton had clocked 1:28.792.

"Obviously, I am really happy," said Bottas. "It took a few races, but hopefully it's the first of many."

"He's been working so hard and today he was just quicker and he did a better job," said Hamilton. "The first sector was my weaker point. I'll work on it for tomorrow.

"That's how close qualifying should always be. It forces us to be on the limit."

Bottas' lap was comfortably faster than Rosberg's pole time last year of 1:29.493, but the overall speed of the new era 'fatter-and-faster' machines was less notable in the desert heat than it had been at the two previous races.

Hamilton, who was seeking his seventh successive pole position and third in a row this season, gave his team-mate a generous hug after the session.

Rosberg was amongst the first to congratulate the pole sittter.

Three-time champion Hamilton who shares the championship lead with Sebastian Vettel, and who had been quickest until the final runs, was unable to find the extra speed he needed on his second run in Q3 to retain pole position.

Four-time champion Vettel was third fastest for Ferrari, unable to make an impact on the two Mercedes men who took the front row. It was the sixth consecutive year in Bahrain that Mercedes won pole.

"I was very happy with my first lap, crossed the line and then looked up and saw both (Mercedes) were ahead," said Vettel. "When I got the time, I was a bit down to be honest. Four-tenths is a lot more than I expected."

Felipe Massa was eighth for Williams ahead of Romain Grosjean of Haas and Jolyon Palmer in the second Renault.

The conditions at the start of qualifying were cooler, and calmer, than they had been earlier in the day. The air temperature was down to 29 degrees Celsius and the track 31, down by six and eight degrees respectively compared to the earlier free practice session.

The first qualifying session saw exits for Carlos Sainz, who lost power with his Red Bull, and Stoffel Vandoorne of McLaren, Sergio Perez of Force India, Marcus Ericsson of Sauber and Kevin Magnussen of Haas.

After another Honda power-unit failure, he decided not to bother at all and was unzipping his overalls without seeking a place in the top ten shootout.

The McLaren man qualified 15th behind the four who were eliminated -- Daniil Kvyat of Toro Rosso, Canadian rookie Lance Stroll of Williams, Pascal Wehrlein of Sauber and Esteban Ocon of Force India.

Another impressive lap from Hulkenberg secured him the fifth-best lap and a place in the shootout for Renault.

Vettel was four-tenths down for Ferrari after the first runs, which saw Raikkonen adrift by a similar gap before the final drama unfolded.

Comments
Topics mentioned in this article
Mercedes Ferrari Valtteri Bottas Lewis Hamilton Sebastian Vettel Bahrain Grand Prix Formula 1
Get the latest Cricket news, check out the India cricket schedule, Cricket live score . Like us on Facebook or follow us on Twitter for more sports updates. You can also download the NDTV Cricket app for Android or iOS.