It was Sebastian Vettel's third win in Bahrain and the 44th of his career, a landmark that left him satisfied with his and the team's work which proved that Ferrari, who employed an aggressive strategy, are back as championship contenders. 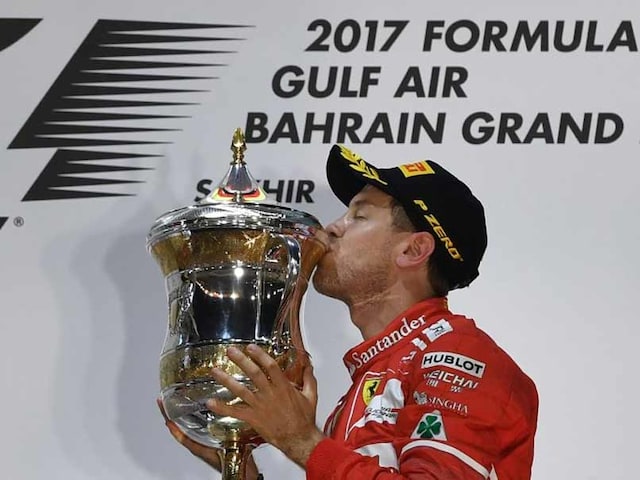 A delighted Sebastian Vettel moved clear at the top of the world championship on Sunday when he claimed a well-judged victory for Ferrari in the Bahrain Grand Prix. The 29-year-old four-time champion came home seven seconds ahead of three-time champion Lewis Hamilton of Mercedes, who made a late charge for victory after collecting a five-second penalty for a pit-lane misdemeanour. Hamilton's new Mercedes team-mate Valtteri Bottas finished third, after starting from his maiden pole position, ahead of compatriot Kimi Raikkonen in the second Ferrari and fifth-placed Australian Daniel Ricciardo.

It was Vettel's third win in Bahrain and the 44th of his career, a landmark that left him satisfied with his and the team's work which proved that Ferrari, who employed an aggressive strategy, are back as championship contenders.

"It's been a really great day for me. The car was really amazing to drive and I could control the race in the end. Lewis was a threat towards the end and, with the traffic, you never know," said Vettel, who also won the season-opener in Australia.

"But finally, it was a controlled race."

Vettel now leads the title race with 68 points ahead of Hamilton on 61.

Hamilton, who was penalised for a pit-lane incident by braking in front of Ricciardo when he slowed before stopping, congratulated Vettel and thanked Bottas, who moved over to let the Briton through in the closing laps.

"It was definitely costly -- the pit lane incident," said Hamilton. "It was my fault. I apologise to the team for losing that time there..."

"It was a very tricky race for me, struggling for pace throughout, I had tyre pressure problems and then I was rear-limited. It was just over-steering everywhere."

Ricciardo's Red Bull team-mate 19-year-old Max Verstappen crashed out of the action after a brakes failure.

Romain Grosjean battled through to take eighth for Haas ahead of Nico Hulkenberg of Renault and Esteban Ocon in the second Force India.

On a significantly cooler day, with a strong wind, the temperatures fell to 25 for the air and 30 degrees Celsius shortly before the race when Belgian Stoffel Vandoorne withdrew after yet another engine failure with his McLaren Honda, his third of the weekend and the team's fourth.

There were two spectacular crashes.

Verstappen crashed out of the race on lap 12 with brake failure and as Vettel charged through the field, Mercedes were thrown a potential lifeline when Toro Rosso's Carlos Sainz and Canadian rookie Lance Stroll of Williams collided at Turn One.

Comments
Topics mentioned in this article
Mercedes Ferrari Sebastian Vettel Lewis Hamilton Valtteri Bottas Bahrain Grand Prix
Get the latest Cricket news, check out the India cricket schedule, Cricket live score . Like us on Facebook or follow us on Twitter for more sports updates. You can also download the NDTV Cricket app for Android or iOS.