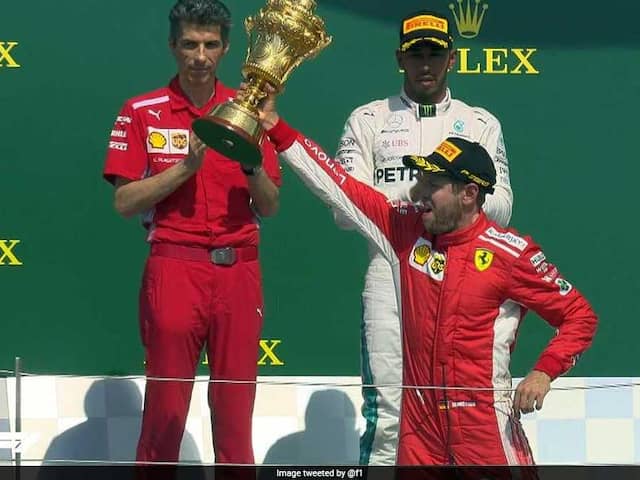 Sebastian Vettel opened up a clear lead at the top of the drivers' world championship on Sunday when he wrecked Lewis Hamilton's home race party and claimed an impressive victory for Ferrari in a thrilling British Grand Prix. The four-time champion seized the lead at the start and fought back after losing the initiative during two safety car periods to register his second win at Silverstone and the 51st of his career. Vettel's win wrecked Hamilton's hopes of taking a record fifth win in succession and a record sixth overall, but the Englishman – who was last after a collision with Kimi Raikkonen on the opening lap – produced a heroic drive to finish second for Mercedes.

His team-mate Valtteri Bottas, on older tyres, led the closing laps, but was unable to resist Vettel or his Ferrari teammate Kimi Raikkonen, who finished third. Bottas was fourth.

It was Ferrari’s first win in Britain since 2011.

"The safety car spiced it up," said Vettel, wearing supporting tapes on his stiff neck. "I had the advantage of the tyres, but it was not easy to find a way through."

Raikkonen apologised for his first lap brush with Hamilton. "It was my mistake," he said. "I deserved the penalty, but I kept fighting."

On another sweltering afternoon in central England, with a track temperature of 53 degrees Celsius (127 degrees Fahrenheit), the drama began immediately. As the lights went out, Vettel made a near-perfect start to pull clear into the lead followed by Bottas.

Hamilton, from his record 76th pole, appeared bogged down as he responded and was instantly in a scrap for third with Raikkonen, who collided with the Briton under braking into Turn Three.

Both spun and rejoined, Hamilton after running off track. He was 19th and last, Brendon Hartley having failed to start in his Toro Rosso.

"I think my car's broken," said the defending champion as he reconciled himself to a charge through a field shaken by the opening lap incidents.

He was soon up to 16th and by lap nine he was eighth, but some distance from Vettel, who led Bottas by six seconds on lap 12. Verstappen and Raikkonen were third and fourth with Ricciardo fifth.

Unexpectedly, Ricciardo made a second stop after 31 laps, lifting Hamilton to fifth as the Australian rejoined sixth, but on softs.

A furious finale to match the frantic first lap looked certain when Ericsson then crashed at Turn One.

The Swede was unhurt and climbed out to applause from the crowd as a Safety Car was deployed. Vettel pitted from the lead, but Bottas stayed out, to lead on lap 34, as did Hamilton.

After their strategic fiasco, in Austria, this was a bold move by Mercedes who took first and third on track with used medium tyres, but without the benefit of fresh "soft" tyres.

As at Spielberg, Hamilton was concerned by the decision.

"There is no way I can compete with new tyres," he said. "You are the fastest by miles, so don't give up. It's all there..."

When the Safety Car came in, Bottas surged clear while Hamilton defended from Verstappen before Carlos Sainz and Romain Grosjean collided at Copse, triggering another Safety Car.

On re-start, at Stowe, Bottas pulled away. Hamilton stayed close in third, hoping for a chance.

As they headed into the final five laps, the top four cars were separated by only 1.6 seconds with the two Red Bulls in pursuit until, on lap 47, Verstappen spun at Club and Vettel squeezed past Bottas, at Brooklands, to seize the initiative.

In a final flurry, Hamilton passed Bottas for second and Raikkonen beat his compatriot to the final podium place.