Valencia will provide Barcelona's new manager Quique Setien with his first true test and an opportunity to make his mark. 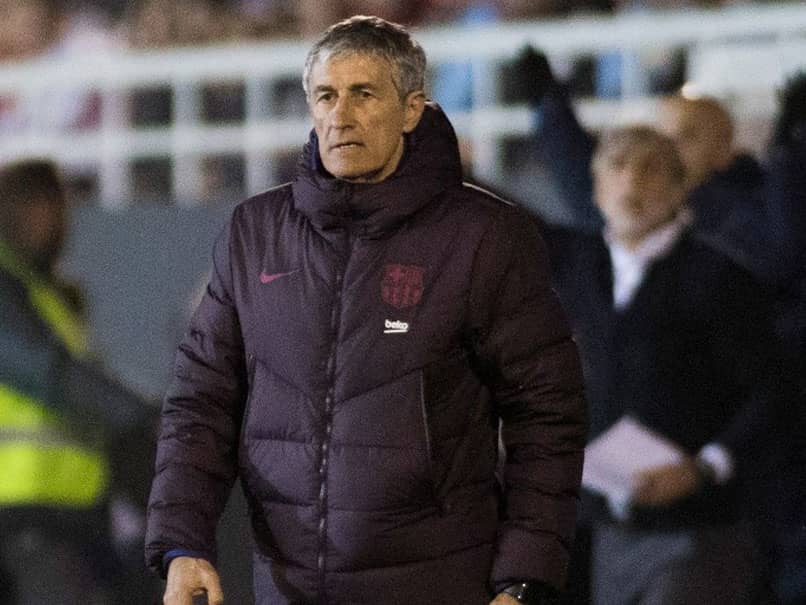 Barcelona's new era has started with two wins out of two but Saturday's trip to Valencia will provide Quique Setien with his first true test and an opportunity to make his mark. After squeezing past Granada 1-0 and scoring two late goals to beat Ibiza 2-1, Barcelona are still without a convincing victory to give their new coach some thrust. Against Granada, there were clear signs of intent, in the 83 per cent possession and 1,005 attempted passes, both the most seen by a team in La Liga since Pep Guardiola's in 2011. "I saw a lot of things that I liked today," said Setien.

But dominance did not convert into goals and the winner, scored by Lionel Messi, only came in the 76th minute, after Granada had been reduced to 10 men following the sending off of German Sanchez.

On an artificial pitch and with a weakened team facing inspired, albeit third tier, opposition, Ibiza in the Copa del Rey perhaps always offered little up-side.

But a 94th-minute winner from Antoine Griezmann, who had scored the equaliser too, spoke less of control and more a narrow escape.

When Setien was appointed last week he admitted it was unusual to take over a team top of La Liga and, despite a longing for a change of style, the sense was he might introduce his beliefs gradually.

Yet already Barcelona look like a side committed to change, perhaps because Setien knows no other way or even because the players were craving something different too.

"I was surprised to see their willingness to work and to accept some of the changes," Setien said last week. "They have to understand everything you say."

Aside from the passing, Barcelona are also pressing higher and attacking wider.

Against Granada, Jordi Alba was playing like a winger and against Ibiza, both of Griezmann's goals came after Alba was brought on as a substitute, his second from a direct assist.

But there could be a danger of too much too soon, not least because it remains to be seen whether this group of players are even suited or capable of playing the football to which Setien is so devoted.

He has already shown faith in youth but Riqui Puig's excellent showing off the bench against Granada preceded a dip against Ibiza, where he was at fault for the goal and taken off in the second half.

Valencia, sitting seventh, have won only two of their last six but the game at Mestalla will provide a better gauge of where Setien's Barcelona are ahead of an important few weeks.

They play Napoli away in the Champions League next month before facing Real Madrid at the Santiago Bernabeu on March 1.

Madrid have looked the sturdier proposition for a few weeks but have been unable to pull away, instead sitting level on points with Barca at the top of La Liga and below them on goal difference.

Zinedine Zidane's team are 18 games unbeaten, a streak they will be confident of extending on Sunday against a Real Valladolid side that have won only once in 11.

"We dont have to change anything, we just have to keep going," Zidane said last week.

They may again be without Gareth Bale, who went off with an ankle injury after scoring in Madrid's Copa del Rey victory over Unionistas de Salamanca on Wednesday.

"He sprained his ankle a little," said Zidane. "I don't think it's much but we'll see."

Atletico Madrid's pursuit of Edinson Cavani will likely come too late for their own title challenge, even if they can persuade Paris Saint-Germain to part with the 32-year-old striker this month.

Eight points is now the gap between them and the top two and while Cavani could certainly alleviate their problems in front of goal.

Atletico host struggling Leganes on Sunday while Sevilla, in fourth, play at home on Saturday against Granada.

Atletico could do with a win after being shocked 2-1 by third division CD Leonesa in the Spanish Copa del Rey on Thursday.

Antoine Griezmann Football
Get the latest updates on India vs Australia Series, check out the India vs Australia Schedule for 2020-21 and Ind vs Aus live score . Like us on Facebook or follow us on Twitter for more sports updates. You can also download the NDTV Cricket app for Android or iOS.