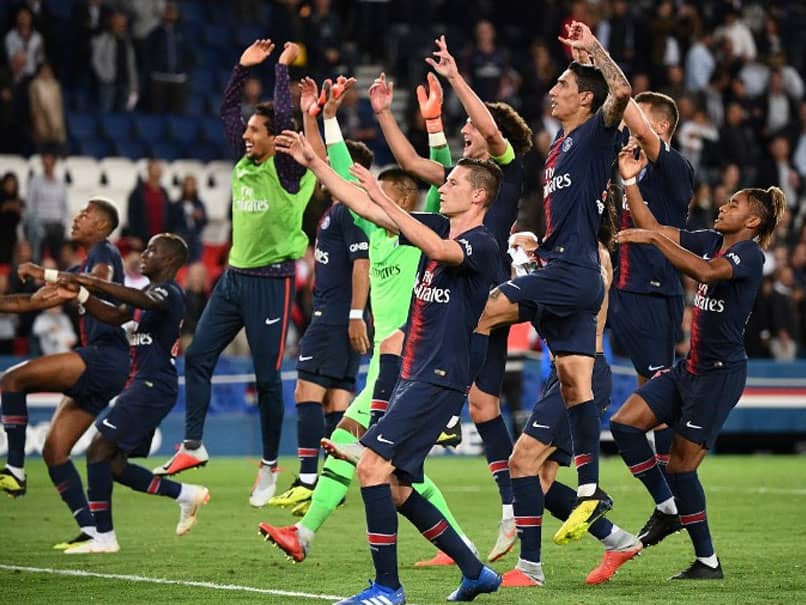 PSG made it five wins from five games at the start of their defence of the French title.© AFP

Kylian Mbappe and Neymar watched on from the stands as Paris Saint-Germain prepared for their Champions League trip to Liverpool with an emphatic 4-0 win over Saint-Etienne in Ligue 1 on Friday. Julian Draxler, Edinson Cavani, Angel di Maria and youngster Moussa Diaby all found the net at the Parc des Princes to allow PSG to make it five wins from five games at the start of their defence of the French title. It was a fine win for PSG, who have already scored 17 goals in the league this season, and Thomas Tuchel is the first coach to win his first five league games in charge of the club.

"We've won five times and that shows we still have a hunger to continue winning," said Tuchel.

However, there is little doubt that PSG will face a far tougher examination at Anfield in their opening Champions League group outing than they did here against Saint-Etienne.

"I'm pleased also that we've played without having our heads turned by the game on Tuesday," added PSG's German coach.

"I've got ideas (as to his line-up) but I'm still reflecting on them. I'll talk to the key players and I'll be watching Liverpool's game against Tottenham and decide on Monday."

Mbappe was absent as he began a three-match ban handed down following his red card in the win at Nimes just before the international break, and Neymar sat alongside him in the crowd, rested after playing for Brazil in a friendly in the United States in midweek.

Being without the two most expensive players in the world was not a problem for the reigning champions, with Tuchel able to give Draxler his first start of the season while midfielder Marco Verratti appeared in a Ligue 1 game for the first time since March.

There was also a debut for Spanish left-back Juan Bernat following his recent move from Bayern Munich, and while the visitors started well enough, PSG never looked back after taking the lead midway through the first half.

Verratti's ball over the top found Draxler in the box, with the German midfielder controlling the ball with his head and then nodding it over Saint-Etienne goalkeeper Stephane Ruffier.

The Saint-Etienne players were wearing shirts carrying the name of William Gomis, a former youth player at the club who was shot dead in the south of France earlier this week.

PSG's second goal arrived just after half-time, with Cavani converting a penalty, his third goal in as many games this season, after he had been chopped down in the box by Loic Perrin.

With PSG goalkeeper Alphonse Areola, preferred to Gianluigi Buffon and fresh from winning his first two senior caps for France, a virtual spectator, the hosts went on to add two more goals late on.

Diaby, the 19-year-old who was sent on at the start of the second half in place of Lassana Diarra, helped set up Di Maria to lash a shot into the roof of the net for the third.

Then Diaby rounded off the scoring after Cavani's swipe at a Draxler cutback had turned into an assist for the teenager.

Earlier on Friday, Nice shook off the absence of Mario Balotelli as they came from behind to beat Rennes 2-1 on the Cote d'Azur.

A Malang Sarr own goal had allowed Rennes to take the lead, but Allan Saint-Maximin equalised before Pierre Lees-Melou's 89th-minute winner for Patrick Vieira's side.

Lyon warm up for their Champions League trip to Manchester City next midweek by going to Caen on Saturday evening.

France's other Champions League contenders are Monaco, who face in-form Toulouse away on Saturday night before hosting Atletico Madrid on Tuesday.

Liverpool Kylian Mbappe Neymar Julian Draxler Edinson Cavani Football
Get the latest updates on IPL 2021, IPL Points Table , IPL Schedule 2021 , live score . Like us on Facebook or follow us on Twitter for more sports updates. You can also download the NDTV Cricket app for Android or iOS.