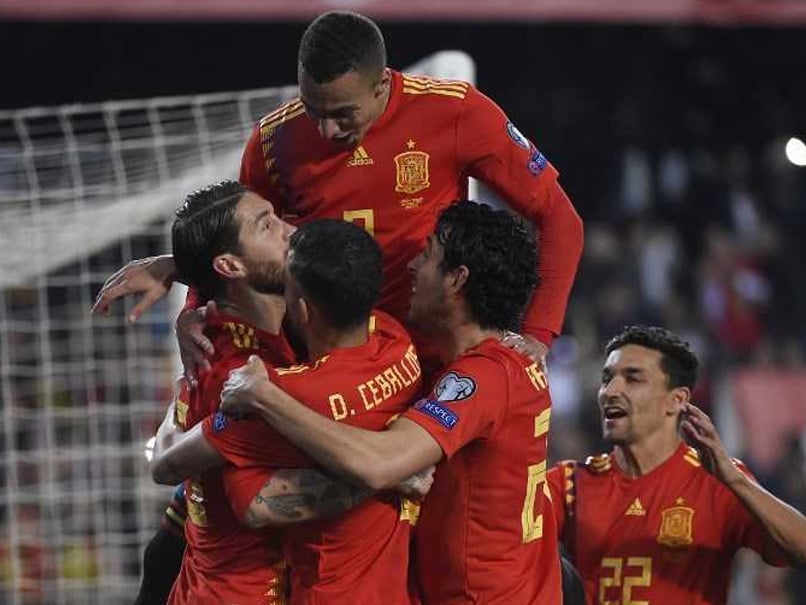 Sergio Ramos scored his 16th goal of the season for club and country.© AFP

Sergio Ramos scored a second-half penalty to help Spain beat a spirited Norway 2-1 on Saturday in their opening Euro 2020 qualifier, while teenage striker Moise Kean netted in Italy's win over Finland. Spain were not at their clinical best in Valencia, but got their Group F campaign off to a solid start despite Norway threatening an upset. The 2010 World Cup winners have been unpredictable of late, having been dumped out by Russia in the last 16 of the World Cup and then missing out on the Nations League finals after a home loss to England.

"The team responded well to their equaliser. You always have the dream and aim of achieving something important," Ramos told Spanish television channel TVE.

"We're in a new stage with a coach who has a fantastic style of play. We'll take things game by game. We'll pick up more confidence from winning."

Coach Luis Enrique named an attacking line-up, with Marco Asensio, Alvaro Morata and Rodrigo all starting, and it was the latter who volleyed home the opener from Jordi Alba's cross in the 16th minute.

Winger Jesus Navas created several other early chances for his teammates on his first Spain appearance since March 2014, but Rodrigo headed over and Morata was denied by away goalkeeper Rune Jarstein.

Norway started to grow into the game and were handed a chance to draw level in the 65th minute when Inigo Martinez grabbed Bjorn Johnsen, and Bournemouth striker Joshua King stepped up to slot past David de Gea.

Spain wasted little time in getting their noses back in front, though, as Jarstein felled Morata to concede a 71st-minute penalty.

Centre-back Ramos stepped up and confidently dispatched a 'Panenka' spot-kick down the middle to score his 16th goal of the season for club and country.

Juventus youngster Kean, 19, became the youngest striker to start for Italy in more than a century as Roberto Mancini's men saw off Finland 2-0.

Italy got off to a flying start in Udine, as Nicolo Barella gave them a seventh-minute lead with his maiden international goal.

The 22-year-old Cagliari midfielder hammered home a low volley after a free-kick was only half-cleared by the Finnish defence.

The day belonged to Kean, though, as he slotted in the second with 16 minutes to play to mark his full debut in style.

"To become part of Azzurri history is an added incentive to keep working," said Kean.

"There are many goals ahead of me and my aim is to achieve them. I wanted to show that I deserved this chance from Mancini."

Italy are top of the early Group J standings ahead of Bosnia and Herzegovina, who edged out Armenia 2-1 as captain Edin Dzeko became the first player in their history to be capped 100 times.

The other game in the group saw Greece win 2-0 against Liechtenstein in Vaduz.

Earlier on Saturday, Mick McCarthy made an inauspicious start to his second stint in charge of the Republic of Ireland as his team laboured to a 1-0 victory over Gibraltar.

The result leaves Ireland second in the early Group D table behind Switzerland, who beat Georgia 2-0, but McCarthy will know he has plenty of work to do after seeing his men struggle to claim just their second win in 12 matches.

Gibraltar almost took a shock lead early in the second half, but captain Roy Chipolina saw his header brilliantly saved by Darren Randolph.

But the 194th-ranked team in the world did not give up and almost found an equaliser when 37-year-old forward Lee Casciaro curled wide after a fine team move.

Elsewhere, World Cup quarter-finalists Sweden made a winning start in Group F as midfielders Robin Quaison and Viktor Claesson both scored in the space of seven first-half minutes in a 2-1 success over Romania.

Sergio Ramos Football
Get the latest updates on IPL Auction 2023 and check out  IPL 2023 and Live Cricket Score. Like us on Facebook or follow us on Twitter for more sports updates. You can also download the NDTV Cricket app for Android or iOS.