Alvaro Morata scored twice in three first-half minutes as Atletico cut the gap to leaders Barcelona back to seven points. 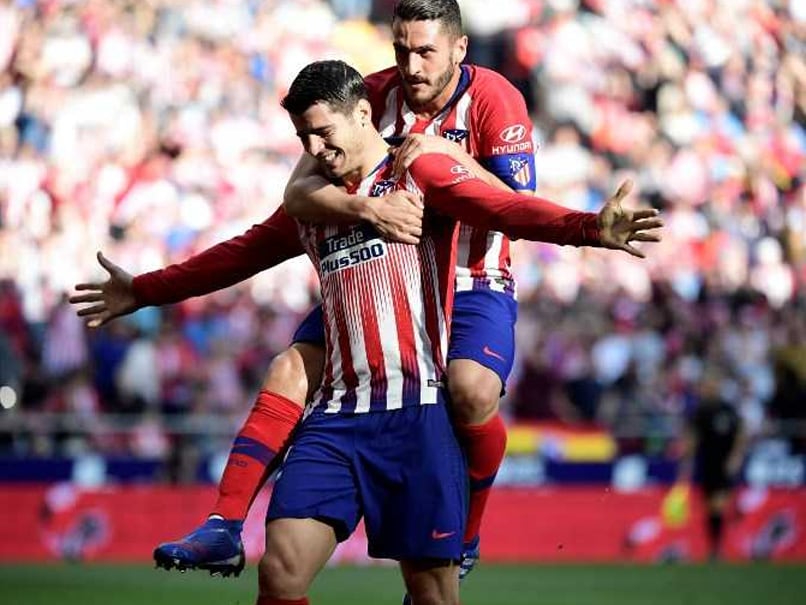 "The sending off of Koke ended the game as we had planned it," said Atletico coach Simeone.

"We had to defend, make ourselves strong in our penalty area and take a game that was very important to win."

After a slow start to the contest, Morata gave Atletico the lead on the half-hour mark by nodding home after Thomas Lemar's corner was flicked on by Diego Godin.

The 26-year-old, who went four games without a goal after joining on loan from Chelsea in January, made it three in two matches shortly afterwards, having opened his Atletico account last weekend against Villarreal.

Once again it was a set-piece that did the damage, as Morata climbed highest to meet Koke's right-wing free-kick with a downward header into the bottom corner.

Sandro Ramirez nodded over as Sociedad started the second half strongly, and the hosts were given renewed hope when Koke was sent off for a second yellow card in the 62nd minute.

Mikel Merino came close to halving the deficit with 14 minutes remaining as away goalkeeper Jan Oblak had to produce a fine save to prevent his header from finding the top corner.

But Atletico closed out the win to move five points clear of city rivals Real, and more importantly, remain in with a chance of lifting a first major trophy since winning the league title in 2014.

Earlier on Sunday, little Getafe gave their hopes of qualifying for a maiden Champions League campaign a massive boost with a 2-1 victory at fellow European hopefuls Real Betis.

Pepe Bordalas' side, who have twice played in the Europa League before, now sit two points clear of Alaves in fourth place in La Liga, with another seven sides within nine points of the last Champions League spot.

Uruguayan defender Leandro Cabrera gave Getafe a 20th-minute lead by nodding in Francisco Portillo's corner, before Jaime Mata slotted in a second on the stroke of half-time.

Former Spain winger Joaquin, 37, gave Betis hope with a powerful drive 15 minutes from time, but the home side slipped to a second damaging defeat in three days after their Copa del Rey semi-final loss to Valencia.

Valencia backed up their Cup exploits as Rodrigo and Kevin Gameiro scored in a 2-0 victory over Athletic Bilbao to move into seventh, just six points behind Getafe.

After a poor start to the season, Marcelino's men are now unbeaten in their last eight league matches and steadily moving up the table despite having drawn 15 of their 26 games.

Celta Vigo sacked Portuguese coach Miguel Cardoso after a 1-0 defeat at Eibar left them just one place and two points above the relegation places.

Barcelona Álvaro Morata Football
Get the latest updates on IPL Auction 2023 and check out  IPL 2023 and Live Cricket Score. Like us on Facebook or follow us on Twitter for more sports updates. You can also download the NDTV Cricket app for Android or iOS.