Iniesta is weighing up an offer from China that would take him away from his boyhood club. 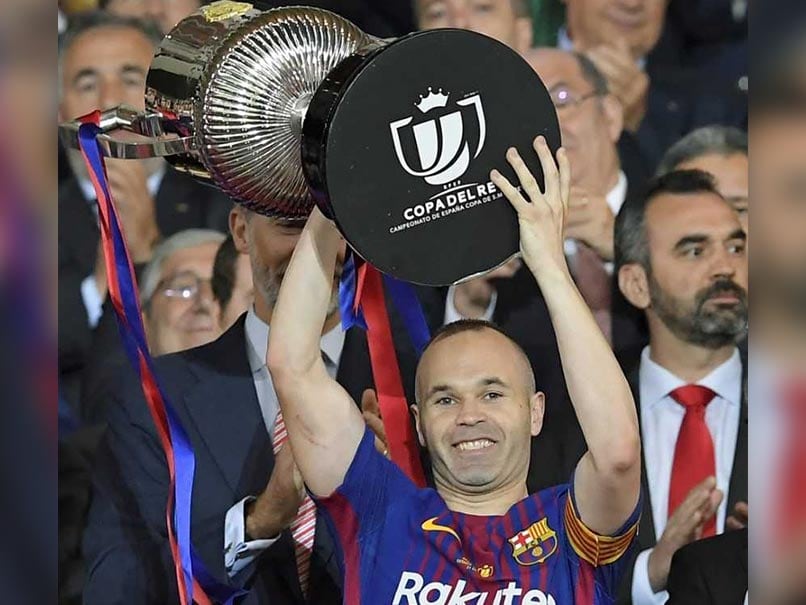 Barcelona captain Iniesta said he would reveal his future plans "this week".© AFP

Andres Iniesta hinted he may have played his last final for Barcelona after they crushed Sevilla 5-0 to win the Copa del Rey on Saturday. Barcelona captain Iniesta said he would reveal his future plans "this week"  as the 33-year-old weighs up an offer from China that would take him away from his boyhood club. There was no sign of age catching up with the Spaniard at the Wanda Metropolitano where Iniesta capped a sublime performance by scoring Barca's fourth goal. He looked tearful as he departed to a standing ovation in the second half, from some Sevilla fans too, before hoisting the Copa del Rey trophy aloft. "This week I will make my decision public but we will always have days like today," Iniesta said. Asked if this was his last final with Barcelona, Iniesta added: "It's a possibility. In a few days I'll make it public and nothing more. Today is a very special and emotional day."

The top sponsor of China club Chongqing Dangdai Lifan told the state-run Xinhua news agency Saturday he was "positive" they would sign Iniesta, who had earlier this year also been linked with fellow Chinese Super League outfit Tianjin Quanjian.

"I will say what the decision is this week," said Iniesta. "I think it's a little clear but we will see."

Lionel Messi scored in between a first-half double for Luis Suarez as Barcelona ran riot to secure their fourth Copa del Rey triumph in as many years. Philippe Coutinho converted a late penalty to make it 5-0.

But Iniesta was the man of the moment, his fourth goal a moment of individual brilliance after a superb shimmy left Sevilla goalkeeper David Soria helpless to save the finish.

"Today he played a match as such a high level, it seemed that he was 25 years old," Sevilla coach Vincenzo Montella said. "It would be difficult to find another player to replace him."

Barcelona coach Ernesto Valverde said: "When I was a player I would have given my right arm to do what he and Messi do. It's a stroke of good luck to have him."

This was the sixth time Iniesta has won the Copa del Rey, adding another trophy to a remarkable collection that already includes eight La Liga titles, three Champions League crowns and a World Cup.

He will win a ninth La Liga title if Barcelona beat Deportivo La Coruna next weekend.

"It was a great night in all ways, on a collective and personal level," Iniesta said. "We will try to add the League to leave a good taste in people's mouths. It is a day of many emotions and I am very happy."

Barca defender Jordi Alba said: "It has been and is a pleasure to share a changing room with him today, he is number one in his position and as person.

"The decision that he takes should be respected because he deserves it. But the day Iniesta leaves is the day we will all cry. We will miss him."

Comments
Topics mentioned in this article
Barcelona Andrés Iniesta Football
Get the latest updates on IPL 2021, IPL Points Table , IPL Schedule 2021 , live score . Like us on Facebook or follow us on Twitter for more sports updates. You can also download the NDTV Cricket app for Android or iOS.