Lionel Messi and Luis Suarez inspired Barcelona to what will surely be the first part of a domestic double this season as they thrashed Sevilla 5-0 on Saturday to win the Copa del Rey. 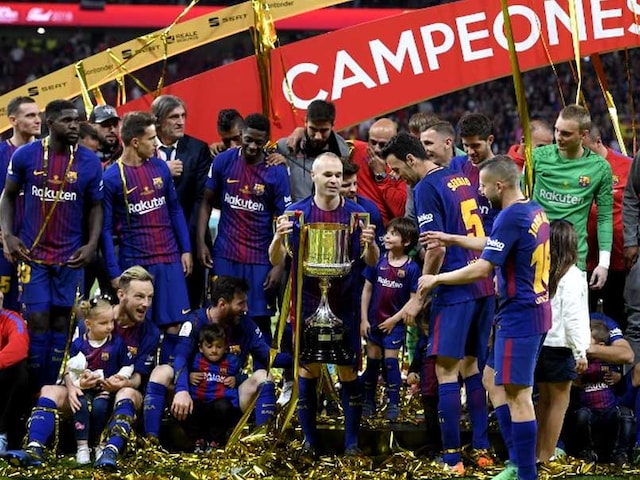 Lionel Messi and Luis Suarez inspired Barcelona to what will surely be the first part of a domestic double this season as they thrashed Sevilla 5-0 on Saturday to win the Copa del Rey. Messi had scored once and Suarez twice before even the half-time whistle had blown at the Wanda Metropolitano, with the sublime Andres Iniesta and Philippe Coutinho later compounding Sevilla's humiliation. Barca's exhilarating display earns them their 30th triumph in this competition and fourth in a row, having reached the final in each of the last five years.

But, despite hugs and high-fives at the end, the real celebrations will be put on ice until next Sunday, when victory over Deportivo La Coruna will confirm Ernesto Valverde's side as La Liga champions too.

Even a clean sweep of the domestic trophies, perhaps polished by La Liga's first ever unbeaten season, will not eradicate the lingering disappointment from Barca's Champions League exit to Roma.

But this performance, as easy on the eye as it was emphatic, will certainly serve as a counter-point to those that believe Valverde's team have been efficient, rather than exciting this season, and overly reliant on Messi.

"Winning the Cup does not hide the disappointment in Rome," Suarez said after the match. "But at the beginning of the season anyone would have signed for a double."

Messi was, of course, superb again on Saturday but this was not a one-man show.

Suarez scored his 31st and 32nd goals of the season while Iniesta delivered one of those effortless displays, in which at times he was virtually unplayable.

If this is to be the 33-year-old's last Barca final before departing for China, it was a fitting farewell, with only goalkeeper Jasper Cillessen absent from the 10-man huddle that engulfed the Spaniard following his shimmying fourth.

By the time Coutinho converted his penalty in the 69th minute, Barca were simply sharing the goals around.

For Sevilla, defeat was always the most likely scenario but this was a whitewash.

Sitting eighth in La Liga, even Europa League qualification now looks an outside bet and there may be repercussions for coach Vincenzo Montella and some of his players in the summer.

"Barcelona has been superior in everything, they have extra-terrestrial players," Montella said.

"??I'm very sorry for the fans who have been fantastic, sorry for the disappointments. I have seen crying in the dressing room but tomorrow, we have to work."

Amid ongoing political unrest between Catalonia and the Spanish government, Barca fans whistled during the national anthem before kick-off, with king Felipe VI watching on.

Their jeers, however, were drowned out by the chants of Sevilla supporters.

When the first goal arrived it came from a long Cillessen punt downfield as Coutinho found himself free behind the Sevilla backline and squared for Suarez to stab home.

Iniesta hit the bar with a rasping shot from distance and soon they were two up, Jordi Alba keeping the ball alive with a backheel that Messi slammed into the roof of the net.

Messi could have had a second were it not for an incorrect offside call and then a cynical foul by Sergio Escudero, for which he was lucky only to receive a yellow card.

Both mattered little, however, as Messi set Suarez free in the 41st minute, and the Uruguayan slid a third under David Soria.

It was another one-two, with Messi again the pivot, that released Iniesta in the second half as the midfielder's dummy-shot left Soria scrambling and an open net for the midfielder to finish into.

Resigned to their fate, Sevilla's fans sang to the end, even as Coutinho despatched a penalty to make it five after the ball had struck Clement Lenglet on the arm.

All that was left was for Iniesta's substitution to be given a standing ovation before the captain hoisted the trophy, perhaps for the final time.

Comments
Topics mentioned in this article
Barcelona Sevilla Lionel Messi Luis Suarez Football
Get the latest updates on IPL 2020, check out the IPL Schedule for 2020 and Indian Premier League (IPL) Cricket live score . Like us on Facebook or follow us on Twitter for more sports updates. You can also download the NDTV Cricket app for Android or iOS.