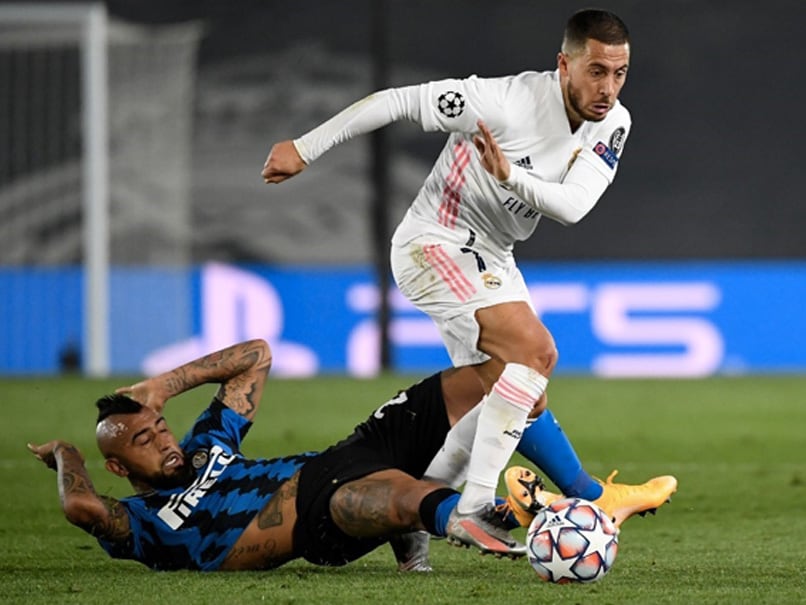 Eden Hazard is likely to start for Real Madrid against Elcha on Saturday.© AFP

Real Madrid coach Zinedine Zidane says he believes Eden Hazard is "going to do very well" at the club as the Belgium star prepares for his latest comeback from injury. Hazard has missed Madrid's past seven games with a thigh problem but could return, as could captain Sergio Ramos, against Elche on Saturday, a timely boost ahead of next week's Champions League clash with Atalanta. "We're happy we're getting back Sergio and Eden for tomorrow. Our idea is they get some minutes, and then we'll see," Zidane told a news conference Friday.

Signed for 100 million euros from Chelsea in July 2019, Hazard has been restricted to just nine starts this season. He has suffered a series of injuries and also missed a game after testing positive for Covid-19.

"He looks well physically and emotionally. He's overcome all these injures, these aches and now he looks good, that's why he's with us and I hope he can play," said Zidane.

"He had a lengthy injury, that he hadn't had before, but he has a long contract and I think he's a player who, when he gets fit, is going to be great, I'm certain of it."

"It's difficult when a player has an injury and isn't 100%, but I'm sure he's going to do very well here," added Zidane.

Ramos, who turns 35 later this month, is available again following knee surgery in February. He hasn't played since January 14 and is out of contract at the end of the season.

"I don't know what's going to happen. What we want is for Sergio to stay here, that's what I can say as coach because he's an important player for us," said Zidane.

Ramos said Thursday "there is no news" regarding an extension but spoke of his desire to play until he is 40.

Sergio Ramos Football
Get the latest updates on Fifa Worldcup 2022 and check out  Fifa World Cup Schedule, Stats and Live Cricket Score. Like us on Facebook or follow us on Twitter for more sports updates. You can also download the NDTV Cricket app for Android or iOS.