The victory is only Real Madrid's second in six matches and leaves them four points behind Atletico Madrid, who have two games in hand and play Valencia at home on Sunday. 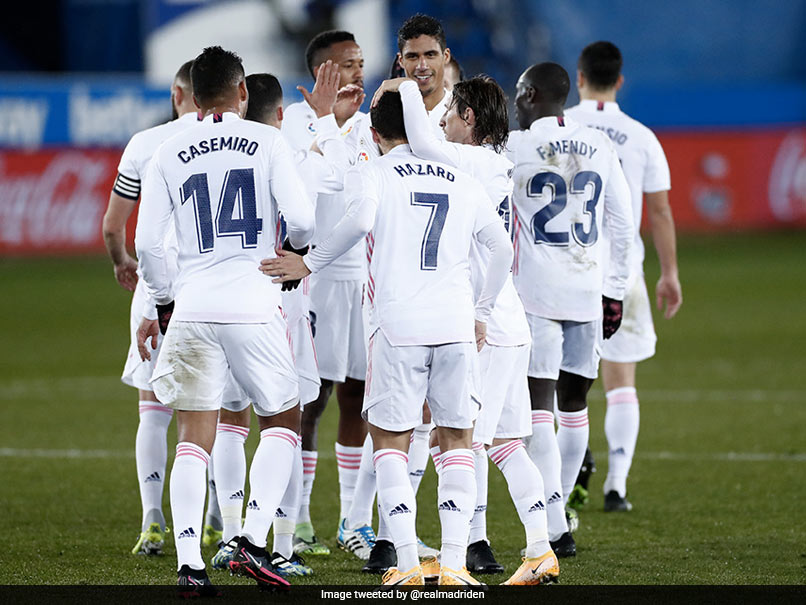 Eden Hazard scored one goal and set up another as Real Madrid thrashed Alaves 4-1.© AFP

Eden Hazard scored one goal and set up another as Real Madrid thrashed Alaves 4-1 on Saturday to ease the pressure on their coach Zinedine Zidane, who was absent after testing positive for Covid-19. Zidane's position has come under scrutiny again after Wednesday's defeat by third-tier side Alcoyano in the Copa del Rey but Madrid responded at Mendizorroza without their coach, or their captain Sergio Ramos, who was out with a knee injury. Goals from Casemiro, Karim Benzema and Hazard put Madrid three up at half-time and while Alaves briefly threatened a fightback when Joselu headed in, Benzema added a second to put the result beyond doubt.

The victory is only Real Madrid's second in six matches and leaves them four points behind Atletico Madrid, who have two games in hand and play Valencia at home on Sunday.

Zidane was confirmed to have tested positive on Friday, leaving his assistant David Bettoni to take charge in the dug-out, although Bettoni was pictured on the telephone in the second half.

"He was very happy with the attitude of the team," said Bettoni when asked what Zidane had told him after the game. "He told me to congratulate the players, as he would have done if he was with us."

Bettoni took off Hazard as Alaves were gaining belief early in the second period but the Belgian enjoyed a positive outing overall that Zidane will hope is the start of a revival.

The 30-year-old has had a nightmare year and a half in Spain, with this only his third goal in La Liga and his first in the league away from home since joining from Chelsea for 100 million euros.

"We have to have more patience, it's true that at Real Madrid patience is difficult," said Bettoni. "I think the best version of Hazard has been seen a little today and that every game we'll see it a bit more."

Benzema was the chief beneficiary as Madrid forgot their recent woes in attack.

There were strong performances too from Toni Kroos, Casemiro and Luka Modric in midfield, the latter providing a handful of supreme passes, one of which led to Benzema's second and Madrid's fourth.

Madrid's first half was probably their best of the season, prompted by an early goal from Casemiro to boost confidence, the Brazilian heading Kroos' corner inside the post.

Hazard scuffed a chance wide but was involved in the second as he tried to flick Lucas Vazquez's pass into Benzema but feathering it was enough, with Benzema given space to fire into the top left-hand corner.

Hazard made it three four minutes later. Kroos looked up and as Alaves pushed out, Hazard surged in behind, the ball looping over for him to control and finish past Fernando Pachecho.

Alaves pushed hard after half-time and were given hope when Joselu headed in from Lucas Perez's free-kick. Yet the comeback was short-lived as Benzema raced onto another curling Modric pass out to the left, nipped inside and stroked into the far corner.

Earlier, Youssef En-Nesyri scored his second hat-trick in four games as Sevilla dispatched Cadiz 3-0 to move up to third.

The Moroccan striker's treble takes him level with Lionel Messi and Luis Suarez at the top of the league's scoring charts with 11 goals and makes it seven for him in the last four matches.

Cadiz, meanwhile, slip to ninth, below Real Betis, who came from behind to salvage a 2-2 draw at Real Sociedad by scoring twice in the last five minutes.

Karim Benzema Eden Hazard Zinedine Zidane Football
Get the latest updates on IPL Auction 2023 and check out  IPL 2023 and Live Cricket Score. Like us on Facebook or follow us on Twitter for more sports updates. You can also download the NDTV Cricket app for Android or iOS.