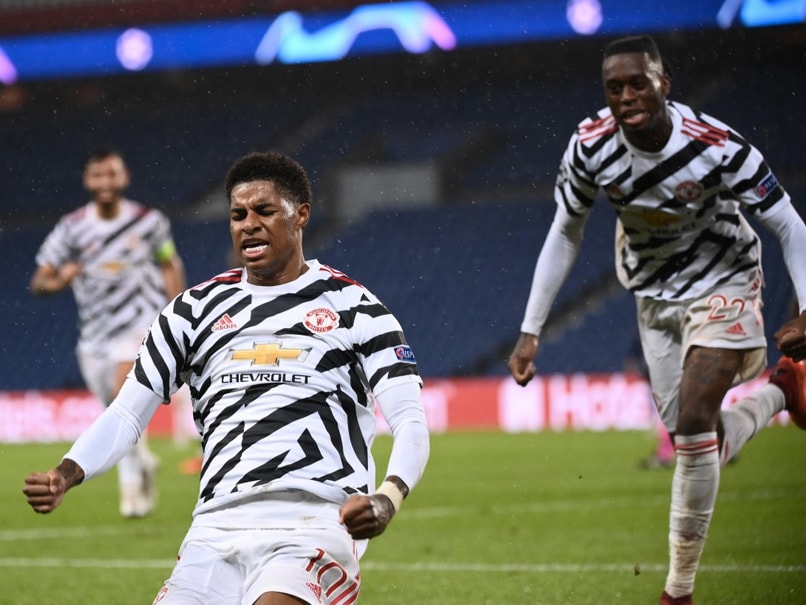 Marcus Rashford scored the winner for Manchester United in the 87th minute.© AFP

Marcus Rashford produced another late strike to sink Paris Saint-Germain as Manchester United beat last season's runners-up 2-1 at the Parc des Princes in their Champions League group-stage opener on Tuesday. The England striker, whose last-gasp penalty gave United a stunning victory over PSG here in the last 16 in 2019, smashed home in the 87th minute as Ole Gunnar Solskjaer'sside claimed a well-deserved three points in Group H.

"They were both opportunities to win the game. As a striker when it's late on, that's your mindset, you might only get one chance and you have to do your best to make it happen," Rashford told BT Sport after repeating his heroics of two seasons ago.

United had taken a first-half lead behind closed doors in Paris courtesy of a retaken Bruno Fernandes penalty after their captain for the match had initially missed.

But it looked as though PSG would escape with a draw despite a poor performance when Anthony Martial headed a Neymar corner into his own net 10 minutes after the restart in this Group H encounter.

It is another fine result for Solskjaer, who was handed the United manager's job on a permanent basis on the back of that victory here in March 2019 and has now seen his side bounce back in style from an embarrassing 6-1 home loss to Tottenham Hotspur just before the recent international break.

"It's a different feeling, it's the start of the group stages, but we still win against a fantastic team," Solskjaer said.

"The last time it was a knockout tie and the euphoria was different. Now there is no fans, it's sterile, there is no one here to celebrate with, but the players were excellent."

Solskjaer had again left Paul Pogba on the bench at kick-off, just like in Saturday's 4-1 Premier League win at Newcastle United, and the Norwegian's decision to start with three centre-backs also paid off.

Axel Tuanzebe came into the defence for his first start in 10 months with Harry Maguire missing, while there was a debut as a left wing-back for Alex Telles following the Brazilian's arrival from Porto.

PSG looked out of sorts, perhaps struggling more than their visitors to adapt to the bizarre experience of playing such a game without fans.

In different times the Parc des Princes would have been buzzing with anticipation ahead of the first game of another Champions League campaign, under the lights.

Instead it was empty, the 9:00 pm local time kick-off coinciding with the start of the nighttime curfew recently introduced in the French capital as part of attempts to slow the spread of the coronavirus.

PSG had been hoping to get off to a winning start to their latest bid to win this competition, two months after Thomas Tuchel's side lost to Bayern Munich in the final.

"It was a performance without intensity, without aggression. It was honestly a bit bizarre," said Tuchel, whose side have games against RB Leipzig and Istanbul Basaksehir to come next.

"We knew we were in a difficult group and it is going to be even harder now."

United went ahead in the 23rd minute from a spot-kick awarded after Martial was fouled by Abdou Diallo.

Having missed a penalty at Newcastle, Fernandes this time saw his kick stopped by Keylor Navas.

However, the Costa Rican was off his line when he made the save so referee Mateu Lahoz ordered a retake. Fernandes kept his nerve to score second time around.

PSG had come close to taking an early lead through Angel Di Maria but they looked off colour and missed Marquinhos and Marco Verratti.

And after a fantastic David De Gea save from Kylian Mbappe and a Layvin Kurzawa cross that landed on the crossbar, they equalised as Martial diverted Neymar's corner into the net.

Pogba then came on, and Rashford was twice denied by Navas before eventually finding the net.

The result sets United up nicely for next week's home clash with RB Leipzig, who beat Istanbul Basaksehir 2-0 on Tuesday.

Paris SG Marcus Rashford Neymar Football
Get the latest updates on SA vs IND 2021-22, check out the Schedule and Live Score . Like us on Facebook or follow us on Twitter for more sports updates. You can also download the NDTV Cricket app for Android or iOS.