Kylian Mbappe struck the opener on 32 minutes at the Stade des Costieres and netted again late on as a weary Nimes folded following the early dismissal of centre-back Loick Landre. 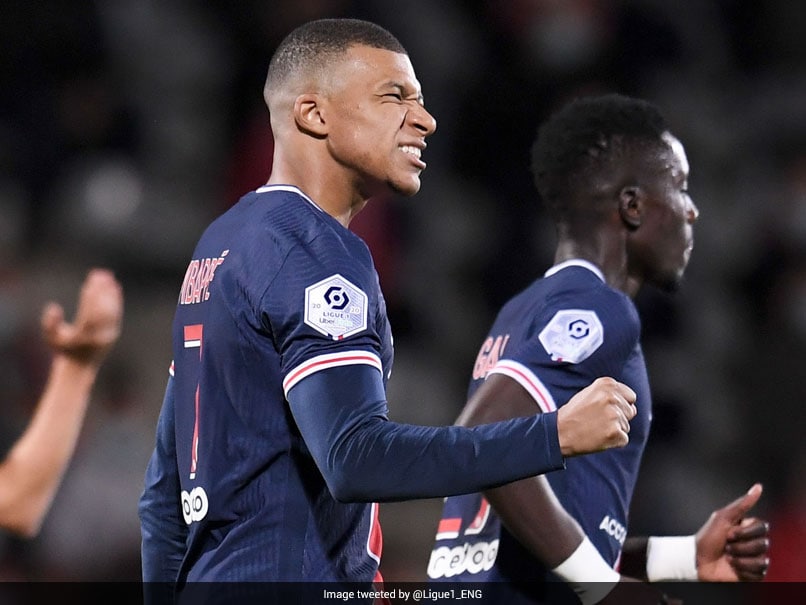 Kylian Mbappe shrugged off any lingering fatigue to score twice in his second game in 48 hours.© Ligue 1/Twitter

Kylian Mbappe shrugged off any lingering fatigue to score twice in his second game in 48 hours as Paris Saint-Germain defeated 10-man Nimes 4-0 on Friday to take over top spot in Ligue 1. The France forward struck the opener on 32 minutes at the Stade des Costieres and netted again late on as a weary Nimes folded following the early dismissal of centre-back Loick Landre. Alessandro Florenzi scored PSG's second on 77 minutes and Pablo Sarabia notched a fourth for the reigning champions as PSG climbed above Rennes on goal difference after a fifth successive win.

"I spoke with Kylian yesterday, he told me that he felt good and that he absolutely wanted to play," said PSG coach Thomas Tuchel.

"He's the guy who can always make a difference and he did just that."

New signings Moise Kean and Rafinha made their PSG debuts with a host of players missing following the international break and just four days ahead of the visit of Manchester United in the Champions League.

Neymar sat out the trip after scoring a hat-trick for Brazil in a World Cup qualifier in Peru that did not finish until the early hours of Wednesday in Europe.

However, Mbappe was handed a second start in three days having scored the winning goal for France midweek in their Nations League match in Zagreb.

PSG lost Leandro Paredes to an injury inside 10 minutes. The midfielder had started both of Argentina's World Cup qualifying wins over Ecuador and Bolivia in the past week.

Landre was sent off moments later for a rash challenge on Rafinha, raking his studs down the side of the ex-Barcelona player's ribs.

Ander Herrera, cleared to return after a positive Covid-19 test, drew the first in a series of superb saves from Nimes goalkeeper Baptiste Reynet having replaced the injured Paredes.

But Mbappe gave PSG the lead after he was played through by Rafinha, rounding the advancing Reynet before slotting in his third league goal of the campaign.

Everton loanee Kean should have added a second but was denied by an alert Reynet, with Idrissa Gueye and Florenzi also testing the Nimes keeper.

Florenzi rattled the post twice in the second half, with a volley and header, but the Italy defender eventually gave PSG room to breathe as he nodded in Sarabia's header back across goal.

Mbappe promptly grabbed his second of the night with another nerveless finish after Sarabia shredded a tiring Nimes defence.

The Spaniard then caught out the hosts from a quickly-taken free-kick to smack in a fourth through the legs of Reynet two minutes from the end.

Earlier, Rennes extended their unbeaten start to the Ligue 1 season despite drawing 1-1 at bottom side Dijon.

Martin Terrier put Rennes ahead in the first half with a neat finish, but Guinea-Bissau international Mame Balde barged through the visiting defence to equalise on 54 minutes.

Eduardo Camavinga, who last week became France's youngest goalscorer since 1914, came on for the last half-hour against a team who had picked up a solitary point from six matches.

Flavien Tait dragged a shot into the ground that clipped the crossbar as it looped over as Rennes were held for the second game in a row.

Lille or Lens could overtake PSG and Rennes with victory in Sunday's Derby du Nord, the first such fixture in over five years.

Paris SG Kylian Mbappe Football
Get the latest updates on ICC Women's Cricket World Cup 2022 and IPL 2022, check out the Schedule , Live Score and IPL Points Table. Like us on Facebook or follow us on Twitter for more sports updates. You can also download the NDTV Cricket app for Android or iOS.