The defeat for Borussia Dortmund, which leaves them third on 39 points, was also the first time teenage prodigy Erling Braut Haaland failed to score for his new club. 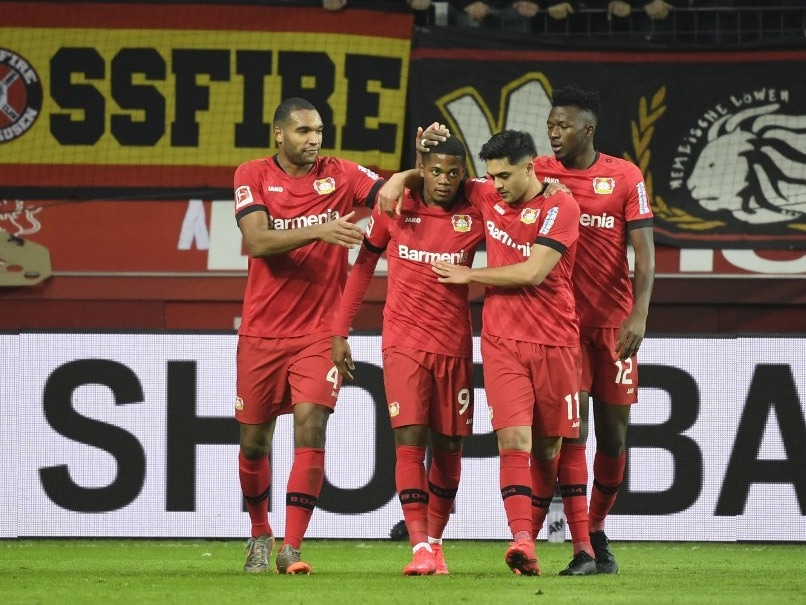 Leon Bailey scored one late goal and made another as Bayer Leverkusen beat Borussia Dortmund 4-3.© AFP

Leon Bailey scored one late goal and made another on Saturday as Bayer Leverkusen earned a stunning 4-3 win over Borussia Dortmund to deny the visitors the chance to move level on points with Bundesliga leaders Bayern Munich. Jamaica winger Bailey came on for the final 20 minutes with his side 3-2 down and after slotting home the equaliser with nine minutes left, the Jamaican winger's audacious backheel seconds later led to Lars Bender heading in Leverkusen's dramatic winner. The defeat for Dortmund, which leaves them third on 39 points, was also the first time teenage prodigy Erling Braut Haaland failed to score after hitting eight goals in his first four games for his new club.

Dortmund could finish the weekend six points behind Bayern Munich if the defending champions beat second-placed RB Leipzig at home on Sunday, after conceding for the 32nd time this season.

"We have to control the situations better and play smarter."

The goals flew at the BayArena with three disallowed efforts on top of the two Kevin Volland also scored for Leverkusen.

Volland put Leverkusen ahead on 20 minutes by firing home with his second touch, but Hummels equalised almost immediately by heading home a corner.

Emre Can put Dortmund 2-1 up with a rifled finish in the 33rd minute before German Volland levelled just before the break.

Dortmund took the lead again in the 65th minute when Achraf Hakimi started a move which released left-back Raphael Guerreiro, who drove his shot home.

The scene was set for Bailey, who had a goal disallowed soon after coming on, but was not to be denied.

After sweeping home a goal of his own on 81 minutes, he back-heeled to Dutch midfielder Daley Sinkgraven who crossed for Bender to nod in the winner.

Earlier, Sweden striker Robin Quaison hit a hat-trick as Mainz beat Hertha Berlin 3-1 in the capital to push Jurgen Klinsmann's side towards the relegation zone.

Hertha have just one win in their five games in all competitions in 2020 under ex-Germany and USA head coach Klinsmann, who took charge in November.

Hertha's only consolation was an own goal by Mainz defender Jeffrey Bruma just before Berlin midfielder Marius Wolf was sent off for a second yellow card soon before the final whistle.

Having also been drubbed 4-0 by leaders Bayern Munich in January, Hertha are now 14th in the table, six points from the bottom three.

Sixth-placed Schalke fell further behind in the title race after a 1-1 home draw with bottom side Paderborn.

Schalke are now seven points behind the leaders before Bayern play on Sunday.

Werder Bremen are now deep in relegation trouble after a 2-0 home defeat to promoted Union Berlin.

Bremen's cause was not helped as Fortuna Duesseldorf moved above them by drawing 1-1 at 10-man Wolfsburg.

Winger Mathias Zimmermann gave Duesseldorf the lead and Wolfsburg had defender Marin Pongracic sent off just after the interval for elbowing Alfredo Morales at a free-kick.

Mid-table Freiburg rebounded from back-to-back defeats with a 1-0 win over Hoffenheim, thanks to a first-half penalty by striker Luca Waldschmidt at the Schwarzwald Stadion.

Borussia Dortmund Erling Braut Haaland Mats Hummels Football
Get the latest updates on ICC Women's Cricket World Cup 2022 and IPL 2022, check out the Schedule , Live Score and IPL Points Table. Like us on Facebook or follow us on Twitter for more sports updates. You can also download the NDTV Cricket app for Android or iOS.