Arsenal were 1-0 up courtesy of Shkodran Mustafi's first goal for the club when, in the third of seven minutes of time added on by referee Jon Moss, Burnley's Ashley Barnes was fouled inside the area by Francis Coquelin. 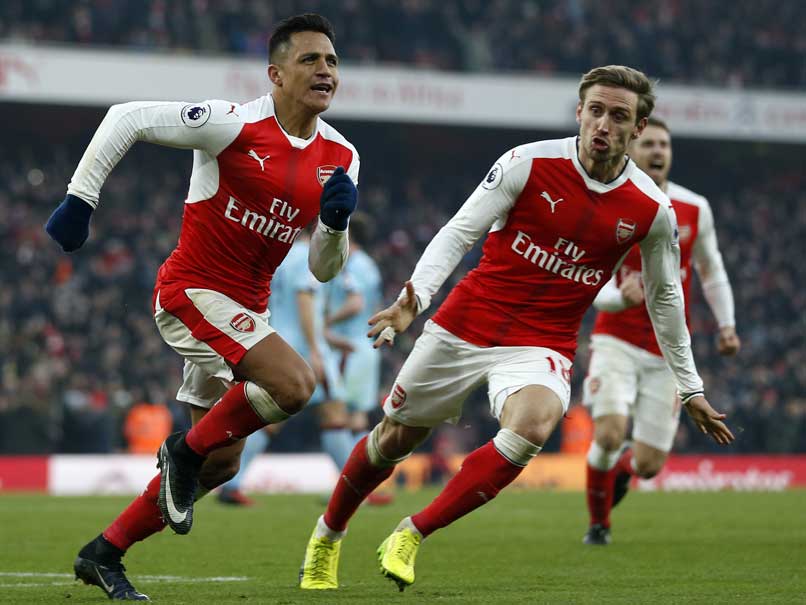 Ten-man Arsenal went second in the Premier League with a stunning 2-1 win over Burnley at the Emirates Stadium on Sunday that saw both sides score penalties in stoppage-time.

Arsenal were 1-0 up courtesy of Shkodran Mustafi's first goal for the club when, in the third of seven minutes of time added on by referee Jon Moss, Burnley's Ashley Barnes was fouled inside the area by Francis Coquelin.

Andre Gray, a childhood Arsenal fan, slammed the spot-kick down the middle, with Petr Cech unable to prevent the equaliser despite getting a hand to the ball.

But that was not the end of the drama.

When Arsenal pumped the ball into the box with virtually the last attack of the game, Laurent Koscielny was caught by a high foot from Ben Mee as he attempted to head in.

Moss, amid suggestions Koscielny was marginally offside, again pointed to the spot and Alexis Sanchez, showing remarkable cool in the circumstances, chipped rather than fired a penalty down the middle.

It had looked like being another frustrating afternoon for Arsene Wenger's men as they squandered several chances against a determined Burnley.

Mustafi eventually broke the deadlock in the 59th minute when he headed in a corner from fellow Germany international Mesut Ozil.

Arsenal had to play the final 25 minutes down to 10 men after midfielder Granit Xhaka was shown a straight red card for a reckless challenge on Steven Defour.

Victory saw Arsenal leapfrog both Liverpool, beaten 3-2 by Swansea on Saturday, and Tottenham Hotspur, held to a 2-2 draw by Manchester City, in the table.

But Chelsea will end the weekend eight points clear of their London rivals if they beat relegation-threatened Hull in Sunday's late match.

There was a boost for the Blues at Stamford Bridge with the return to their starting XI of striker Diego Costa.

The Brazil-born Spain striker, Chelsea's top scorer this season with 14 goals, missed last weekend's 3-0 win at Leicester City due to a back complaint.

But he was reported to have had a training-ground row with fitness coach Julio Tous, amid speculation he had been the subject of a mega-money offer from Chinese club Tianjin Quanjian.

Costa replaced Willian in the only change made by Chelsea manager Antonio Conte.

The Saints were 2-0 up before the break at St Mary's thanks to goals from James Ward-Prowse and Jay Rodriguez before Dusan Tadic's penalty four minutes from time completed a comfortable win.

Victory was just the boost south coast side Southampton, now 11th in the table, needed ahead of their League Cup semi-final second leg clash against Liverpool on Wednesday, with the Saints taking a 1-0 lead to Anfield.

"It (Anfield) is a tough place to go but we can take confidence from today and how we played against them in the first leg and hopefully we can get to Wembley," Ward-Prowse told Sky Sports.

Meanwhile Leicester manager Claudio Ranieri blamed himself for the Foxes' latest loss and promised to revert to the formation that proved so successful for the Foxes during their shock title triumph last season.

"I think it is much better to give them what they know well," added the Italian after Leicester's 11th defeat in 22 league matches so far this season left them just five points above the relegation zone.

Comments
Topics mentioned in this article
Arsenal Burnley Southampton Leicester City English Premier League Football
Get the latest updates on IPL Auction 2023 and check out  IPL 2023 and Live Cricket Score. Like us on Facebook or follow us on Twitter for more sports updates. You can also download the NDTV Cricket app for Android or iOS.