Pep Guardiola saw his side beat Brighton 2-0 in comfortable fashion at the Etihad Stadium on Saturday, with goals from Raheem Sterling and Sergio Aguero. 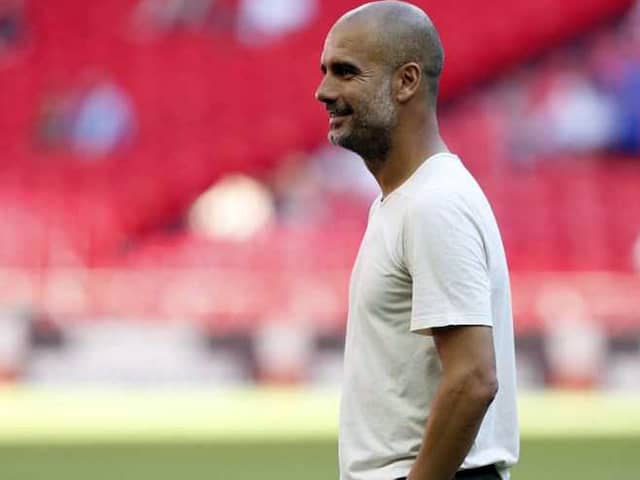 Pep Guardiola reckons Manchester City may be playing at an even higher level than the one they achieved in winning the Premier League title in record-breaking style last season. The City manager saw his side beat Brighton 2-0 in comfortable fashion at the Etihad Stadium on Saturday, with goals from Raheem Sterling and Sergio Aguero. It was a result that meant the reigning champions had dropped just two points -- in a draw at Wolves -- during their first seven league games. City's results are all the more impressive given they have been without Kevin De Bruyne, arguably their best player last season, who is yet to kick a ball this term having injured his knee on the eve of the new campaign.

And Guardiola insisted the attitude of his players has helped City reach the same -- if not higher -- heights than they did last term, a claim that will be tested in Sunday's visit to Liverpool.

"Most of the time we are playing even better than last season," said Guardiola. "After the kind of season we had, we had fears we might drop points. We dropped two at Wolves but in general all the performances were good."

However, the former Barcelona and Bayern Munich boss warned: "But it is only September. The two games before the international break will be so important for us.

"With that spirit, the way we play, people are focused on the normal things -- set-pieces, throw-ins, defence, what we're doing without the ball."

Aguero wrapped up the win, playing a superb role in making and claiming the second goal, after 64 minutes only for Guardiola to immediately replace him and reveal he is struggling with a heel injury ahead of Tuesday's Champions League visit to Hoffenheim.

"Sergio is struggling a little bit with some problem in his foot, he is not 100 per cent," said Guardiola.

"He's not recovered after his injury against Newcastle (last month) and we spoke about him playing 50-55 minutes. We were lucky he scored a goal in the right moment.

"Hopefully he will be okay for Tuesday. We're controlling the injury, we're fighting it but he needs time. Now we have two games before the international break, hopefully, he can do those and, after, make a final recovery."

Having played a one-two with David Silva, Aguero dribbled 30 yards, beating four defenders in the process, before playing the ball wide to Sterling and continuing his run.

Sterling himself had opened the scoring, finally breaking down Brighton's resistance, after 29 minutes.

A Brighton move stalled when Leroy Sane intercepted 10 yards inside the visitors' half, sparking a cavalry charge upfield with Bernardo Silva and Aguero working a move back to the German winger on the left.

Sane's cross was as accurate as it was selfless, the ball moved across the face of an open goal for Sterling to slide in and convert his fourth goal of the season from point-blank range.

Brighton had a late penalty appeal after Fernandinho appeared to handle but their goalkeeper, Mat Ryan, also had to make three impressive saves, from Sterling and Fernandinho in the first half and David Silva in the second.

Still, City won well enough to be able to look forward to Sunday's big game at Anfield with optimism.

"Liverpool beat us three times last season which shows they are a good side and at Anfield they score a lot of goals," said Guardiola.

"They reached the Champions League final. With (Manchester) United they are the most historic team in England. After Hoffenheim we are going to prepare."

Brighton & Hove Albion English Premier League Pep Guardiola Football
Get the latest Cricket news, check out the India cricket schedule, Cricket live score . Like us on Facebook or follow us on Twitter for more sports updates. You can also download the NDTV Cricket app for Android or iOS.