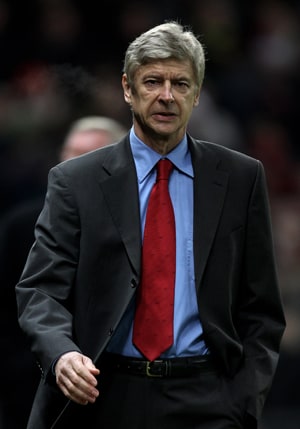 Wenger leads his side into their opening Premier League game of the season against Sunderland at the Emirates Stadium just days after van Persie sealed his £22 million transfer to Old Trafford.

The departure of the Holland international, Arsenal's captain and leading goalscorer last season, is clearly a significant loss for Wenger.

But the fact van Persie has joined one of Arsenal's main rivals for the English title has only added to the frustration of the Frenchman, who would have preferred to see his star forward move abroad.

"To strengthen an enemy is the other negative point of this loss," Wenger said.

"We wanted to avoid it but we couldn't. Honestly, I'd rather sell him abroad, to Paris Saint-Germain for example.

"Manchester United know him and know his qualities. He's really an exceptional player, believe me."

Van Persie's departure was inevitable after the player declared he would not extend his current contract, raising the possibility of him leaving as a free agent at the end of the forthcoming season.

But the move has left Wenger once again negotiating the opening weeks of a new season having lost one his star players over the summer months.

Last year Samir Nasri and then captain Cesc Fabregas moved on, although this time around the manager has at least been able to plan for the anticipated change.

Olivier Giroud and Lukas Podolski arrived at the start of the transfer window to strengthen Wenger's attacking options, while the move for Spain midfielder Santi Cazorla has been heralded as one of the most eye-catching transfers of the close season.

"Van Persie is a great player so it's always sad to lose such a player. But we must consider the economic reality and the will of the player," Wenger added.

"When you can't succeed in extending the contract of a player who is in their last year there is no other way but to let him go.

"It's sad because he played for us for eight years. He's 29 now. He was 21 when he came and it's another bitter pill to swallow.

"A lot has happened before and we survived it all, but this is a real challenge because van Persie scored 30 (Premier League) goals in a year, almost one per game. It's a tough challenge for our new forwards to replace him."

After seven years without a trophy and a succession of big-name departures, Arsenal may once again have to settle for a top-four finish rather than significant silverware.

But they should make a winning start against a Sunderland side low on summer signings, with Carlos Cuellar, the former Aston Villa defender, the only arrival before Thursday's swoop for veteran striker Louis Saha.

Saha, 34, signed a one-year deal 48 hours before the trip to the Emirates stadium and manager Martin O'Neill believes the former Everton and Tottenham forward will prove a valuable addition to his squad.

Sunderland, who finished mid-table last season, have struggled to replace departed forwards Asamoah Gyan and Nicklas Bendtner and O'Neill turned his attention to Saha after being frustrated in his attempts to sign Wolves forward Stephen Fletcher.

O'Neill said: "Louis is a striker whose abilities have been proven at the very highest level and he brings with him a raft of experience of top flight football.

"I'm sure he will be a great addition to our squad in an area that we recognise needs strengthening and I'm delighted we have been able to complete the deal ahead of our first game of the season."

Comments
Topics mentioned in this article
Football Liverpool Arsenal Chelsea Manchester United Wayne Rooney Alex Ferguson Manchester City Mark Hughes English Premier League
Get the latest updates on India vs Australia and check out  Schedule, Results and Live Score. Like us on Facebook or follow us on Twitter for more sports updates. You can also download the NDTV Cricket app for Android or iOS.