India lost the Test series but bounced back to win the ODIs against England. Captain Mahendra Singh Dhoni says the youngsters in the side should see the matches as a learning experience. 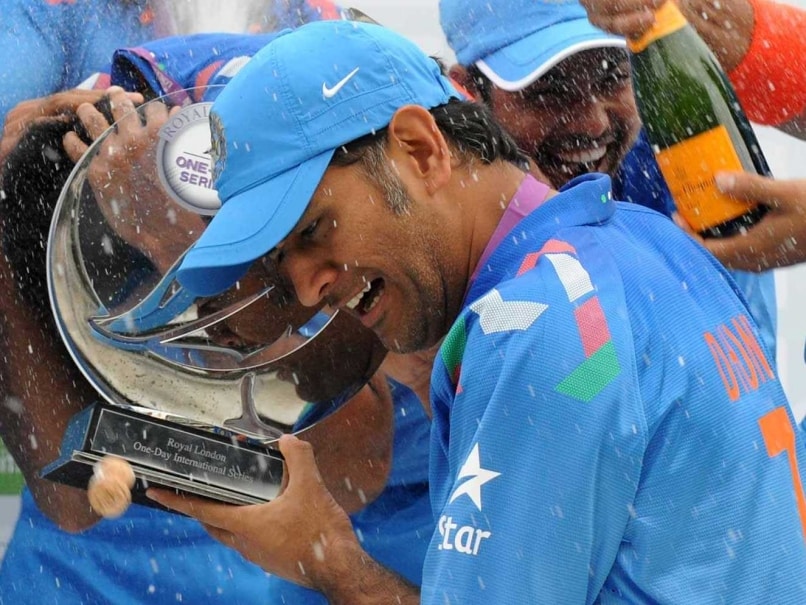 India captain MS Dhoni celebrates with the ODI trophy after his side beat England 3-1.© AP
Birmingham:

India captain Mahendra Singh Dhoni said he hoped the younger players in his side would learn from their time in England after a tour of mixed fortunes ended with a dramatic Twenty20 defeat.

It looked as if India, who lost the five-match Test series 3-1 but recovered to win the one-day internationals by the same margin, would finish with a flourish at Edgbaston on Sunday.

However, they finished on 177 for five in pursuit of a target of 181 in the lone Twenty20 international, with Dhoni unable to hit what would have been a match-winning six off the last ball, from Chris Woakes.

A five-Test series was previously unheard of for this India team and the one against England was squeezed into just 42 days.

"Overall, there were many youngsters on this tour," said Dhoni.

"Five Tests are tough. None of our players had played five Tests (in a series before)."

India, however, made an encouraging start with a drawn first Test at Trent Bridge followed by a 95-run victory in the second Test at Lord's.

But a 266-run defeat in the third Test at Southampton turned the tide, with India subsequently innings losses inside three days in both the fourth and fifth Test at Old Trafford and The Oval respectively.

"We did well in the first two matches, but the last three we could not do well," said Dhoni. (Match in Pics | Highlights | Scorecard)

Then came the one-dayers where India, the reigning world champions, were a transformed team as they showed they will be one of the sides to beat when they defend their 50-over title at the World Cup in Australia and New Zealand starting in February.

"It was important to do well in the ODIs and we did do that," said the 33-year-old Dhoni, a rare figure among modern captains of major international side in that he leads his country in all three formats -- Tests, ODIs and T20.

"It's important to learn from what we experienced here, at home to the West Indies and in Australia," said Dhoni, whose side will warm-up for the World Cup with a tri-series against the co-hosts, also featuring England, in January.

"If we can implement these learnings there, we will be satisfied."

Having been on course for victory at 131 for two in the 15th over on Sunday, India lost their way when Virat Kohli fell for 66 -- his best score against England in any format on an otherwise disappointing tour.

But Dhoni might still have won the game off his own bat.

He was facing when India needed 17 off the last over for victory and promptly launched Chris Woakes for six.

The next ball saw India complete a risky two as Dhoni retained the strike. Dhoni failed to score off the third ball but mishit the fourth off paceman Woakes for a boundary over long off.

Dhoni then refused a single that would have put Ambati Rayudu on strike.

That left him needing to hit a six off the last ball or four to send the match into a super over.

But he was unable to hit a boundary.

"Rayudu had just came into bat. He's not someone who's used to batting at number six or seven and can hit ball straightaway," Dhoni said.

"So it was a better option for me to take all the strike, that's what I thought. But it didn't pay off."

England scored 67 in their last four overs as India's 'death' bowling, an area Dhoni had previously warned needed improvement ahead of the World Cup, was exposed again.

Paceman Mohammed Shami took an impressive three for 38 in four overs but couldn't stop England, for whom skipper Eoin Morgan made a blistering 71, running riot late on.

"Yorkers are still a worry," said Dhoni. "If you can't get yorkers right, then you need to change your line and length.

Comments
Topics mentioned in this article
India Cricket Team England Cricket Team MS Dhoni Eng vs Ind, 2014 Cricket
Get the latest updates on IND vs NZ 2021, check out the Schedule and Live Score . Like us on Facebook or follow us on Twitter for more sports updates. You can also download the NDTV Cricket app for Android or iOS.