India's 3-1 series loss to England means they have not won a series outside the sub-continent since their Test series victory in New Zealand in 2009. 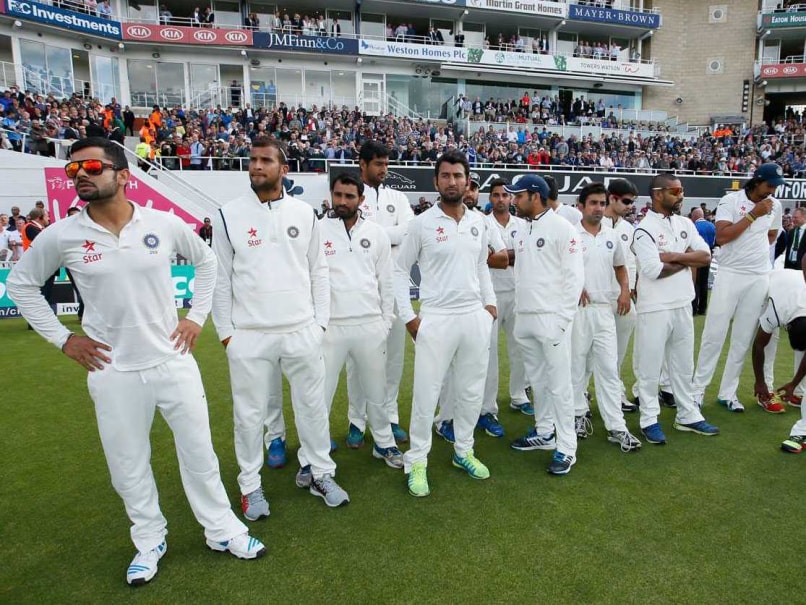 India were outclassed in every department by England and there was no respite for the visitors.
London:

'Tigers at home, pussycats abroad', has long been a charged levelled against India's cricketers. (India's Test Defeat Will be Swept Under the Carpet, Laments Gavaskar)

It is one that will be repeated after India's 3-1 defeat by England in a five-match Test series finished with a colossal innings and 244-run loss at The Oval on Sunday that culminated in the tourists collapsing to 94 all out.

All this came after they had gone 1-0 up after a draw at Trent Bridge was followed by a 95-run win at Lord's -- India's lone win in their past 19 Tests on foreign soil.

Well, in one sense, India's defeat was part of a global trend.

Research carried out by Sky Sports cricket statistician Benedict Bermange and published by Britain's Sunday Telegraph, shows that in the last 20 years, out of 28 five-Test series, 21 have been won by the home side.

India handicapped themselves on this trip by not having any tour matches in between any of the five Tests, meaning struggling batsmen -- of which they had several, notably Virat Kohli, who finished the series averaging just 13 -- had no chance to find form outside of the international arena.

In such circumstances there was a limit to how much advice India's experienced former England coach Duncan Fletcher could usefully impart.

And by squeezing the five Tests into an incredibly tight 42-day schedule, there was always the risk of an injury, especially to a fast bowler. (How Divine Intervention Didn't Save India at The Oval)

It was a problem of which England were acutely aware and something new-ball duo James Anderson and Stuart Broad, both of whom are well-used to five-Test series and who took 44 wickets between them this campaign, know how to manage.

By contrast, this was India's first five-Test series in England since 1959 and it was paceman Ishant Sharma, the star of their win at Lord's, who broke down with an ankle injury that kept him out of the next two Tests.

India's bowlers performed creditably but were undone by fielding errors -- Ravindra Jadeja's dropped slip catch that reprieved Alastair Cook, the captain of an England side mentally reeling from a 5-0 Ashes thrashing in Australia and a home loss to Sri Lanka, in the hosts' 266-run win in the third Test was arguably the turning point of the series. (England Crush India)

India also wasted energy on a fruitless attempt to get Anderson banned after his dust-up with Jadeja in the drawn first Test at Trent Bridge.

They also were not helped by increasingly poor returns from their batsmen, who struggled on pitches that -- after the docile surface at Trent Bridge -- were increasingly conducive to seam movement.

Many an old pro has moaned that modern batsmen, used to hitting through the line with confidence in one-day events such as the lucrative Indian Premier League where conditions are generally in their favour, are far less assured when confronted with deliveries that deviate off a straight line.

"Once the batting began to slide a bit it became tough for them to cope because not many of them have played more than 15 or 20 Test matches and may be eight or 10 outside the sub-continent," said India captain Mahendra Singh Dhoni.

In England, players, fans and media alike all regard Test cricket as the standard by which the team is judged, which may explain the national side's poor one-day record.

The reverse position appears to hold true in India, where Dhoni remained as captain after a 4-0 Test series loss in England in 2011 having led his side to one-day World Cup glory on home soil earlier that year.

"If you do not want to be playing Test cricket for India, quit," said Sunil Gavaskar, one of India's greatest opening batsmen after Sunday's defeat.

"Just play limited-overs cricket," he added ahead of next week's England-India one-day series. "You should not be embarrassing your country like that."

Dhoni was out for a duck on Sunday, but without his 82 in a first-innings total of 148, the scale of India's third-heaviest Test innings defeat might have been even greater.

Asked if he had taken India as far as he could, Dhoni replied: "Maybe yes.

But India need a change of attitude, much more than a change of captain, to conquer their away-day blues.

Comments
Topics mentioned in this article
India Cricket Team England Cricket Team Eng vs Ind, 2014 Cricket
Get the latest updates on SA vs IND 2021-22, check out the Schedule and Live Score . Like us on Facebook or follow us on Twitter for more sports updates. You can also download the NDTV Cricket app for Android or iOS.