India were bundled out for 94 on Day 3 of the fifth and final Test at the Oval as England recorded a comprehensive win by an innings and 244 runs to clinch the five-match series 3-1. 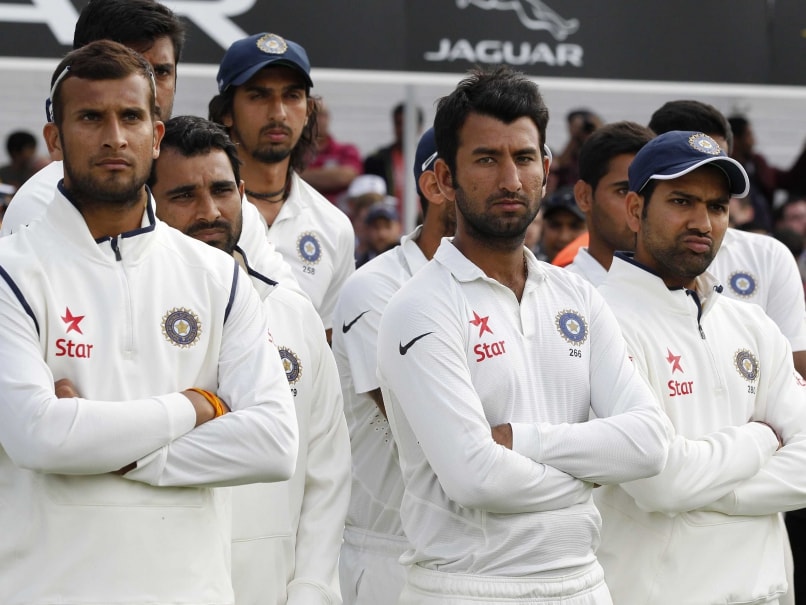 Meek surrender? Abject failure? Lacklustre approach? Fading intent? These are a few ways to describe Team India's performance in England in the last 40-odd days as Mahendra Singh Dhoni and team plummeted to an innings defeat at the Oval on Saturday. England's 3-1 series win must have pleasantly surprised the hosts as well.

Mahendra Singh Dhoni & Co. arrived in London with a great prospect of beating a struggling England side and avenge the 2011 massacre. India made the right noise with a team minus old warhorses Sachin Tendulkar, Rahul Dravid and VVS Laxman. The first Test at Trent Bridge was drawn. India scored a historic win at Lord's but instead of getting better, India hurtled downhill losing a hattrick of Test matches like schoolboys.

Following back-to-back defeats inside three days, Dhoni has run out of excuses to defend such consistent poor form. 'Lack of application', 'loss of confidence' and even the straightforward 'our batsmen didn't really perform from the start' have just become too monotonous. Forget the positives, Sunil Gavaskar has rightly said that a series loss of this magnitude can only leave scars in the minds of the first-timers.

It's good to be aggressive but when you can't back it up with performance, you become a butt of jokes. Two Indian cricketers stood out in this department. Virat Kohli and Ravichandran Ashwin's defiant nature in front of the media was totally out of place in England. There was never an element of regret. At least, Ashwin scored a few runs (although his main job was to take wickets) and Kohli made more news because his lady love, Anushka Sharma. (Team India Test Defeat vs England Will be Swept Under the Carpet: Gavaskar)

In six Tests away from home, Ashwin has captured 12 wickets at an average of 64.50 -- his strike rate being 122.7 (as against his strike rate of 59.1 at home). Kohli has failed to score a fifty in 10 innings in a row -- a dubious distinction recorded by him for the first time. Kohli could manage just 134 runs at an average of 13.40 in the series, his worst ever performance in a Test series. (Dhoni Ducks Questions on Captaincy, Says Don't Blame IPL for Test Shame)

Sitting in the commentary box, former skipper Sourav Ganguly was squirming in his chair looking at the way the 'future of Indian cricket' Cheteshwar Pujara and Kohli were repeatedly struggling against the English pacers. He pointed out a glaring error in Kohli's approach - playing the pacers on the first line, based on how the ball was released from the hand and not accounting for the swing. That, he said, was how you play a fast bowler on Indian pitches where the ball hardly moves. On seven out of 10 occasions, Kohli has edged a swinging delivery behind the stumps.

The art of waiting and playing the ball late, the way Dravid and Laxman did this to good effect, seems to be dead. Here's an Indian middle-order, failing to acknowledge the 'corridor of uncertainty' and showing eagerness to push at every delivery bowled just on or outside the off-stump. Results are for all to see. India have scored a record of ducks in this series. Till the first innings at Oval, Indian players recorded 14 ducks against three by England. (How Divine Intervention Didn't Save India at The Oval)

Yet, Dhoni reckons Kohli is going through one of his 'lean patches' and Pujara is unfortunate because the openers haven't built a stand and the number three man is coping a lot of pressure early on. Ajinkya Rahane, who started the series on a bright note and scored a century at Lord's, has been caught and bowled thrice in the series, out of his nine dismissals. The other six times, he was caught behind or taken in the slips.

Two important facets of the sport - slip catching and ability against spin bowling - were claimed to be India's forte. That image has been severely shattered in England. When Ravindra Jadeja put down Alastair Cook's early offering in Southampton, it was India's eighth dropped catch in the slips and many more followed. The ineptitude was further magnified as England were sharp as ever in the slip cordon, accounting for most of the Indian wickets over the five matches. (Highlights)

Graeme Swann's retirement in 2013 and Monty Panesar's temperamental ways meant England were without a regular spinner. Yet, Moeen Ali was made to seem like a bigger threat. To his credit, Ali bowled very good line and length for a part-timer and varied his pace excellently. For a side, bred on spin bowling, to give away 19 wickets to Ali was befuddling. (James Anderson Elated After Summer Ends on High for England)

India's travel illness continues. Team Dhoni play West Indies at home in October-November. We could see three-day Test matches again, but this time, India will on the right side of horrifying results. As Gavaskar says, the England rout will be swept under the carpet. Time is Indian cricket's best healer.

Comments
Topics mentioned in this article
India Cricket Team England Cricket Team Eng vs Ind, 2014 MS Dhoni Cricket
Get the latest updates on SA vs IND 2021-22, check out the Schedule and Live Score . Like us on Facebook or follow us on Twitter for more sports updates. You can also download the NDTV Cricket app for Android or iOS.