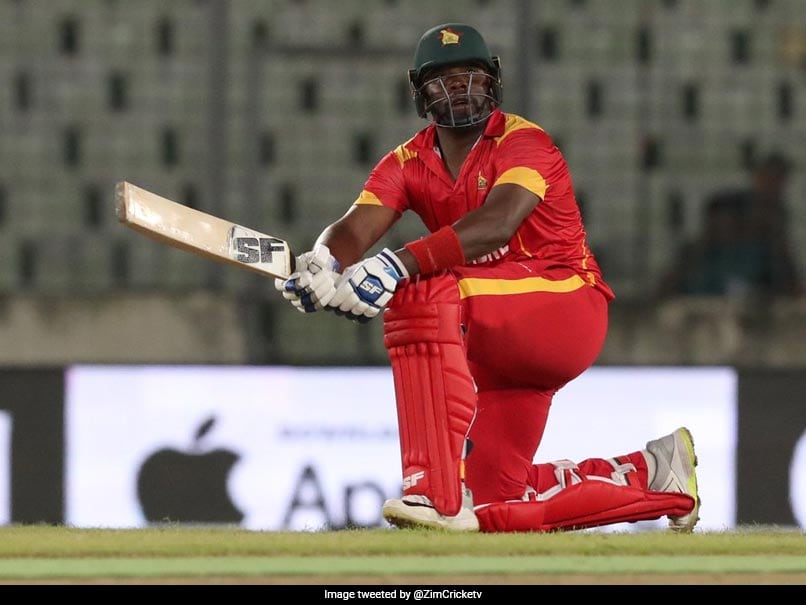 Hamilton Masakadza struck a blazing half-century in his farewell match to lead Zimbabwe to a seven-wicket win over Afghanistan in their last match of the Twenty20 tri-series in Chittagong on Friday. Captain Masakadza hit 71 off 42 balls with four fours and five sixes as Zimbabwe reached a target of 156 with three balls to spare after Chris Mpofu's career-best 4-30 helped the side restrict Afghanistan to 155-8 at the Zahur Ahmed Chowdhury Stadium. "Fantastic feeling to finish off like that. I always knew the boys had a performance in them," Masakadza said after the match.

"It is good to get a send-off like this. It was fantastic to be with the boys today."

Afghanistan will face Bangladesh in the final on September 24.

The 36-year-old Masakadza, who has brought an end to his 18-year international career, was involved in partnerships of 40 and 70 with Brendan Taylor and Regis Chakabva to set up Zimbabwe's run chase.

Off-spinner Mujeeb Ur Rahman (2-28) dismissed Taylor for 19 to give Afghanistan their first breakthrough before Dawlat Zadran ended Masakadza's aggressive innings.

But Chakabva made 39 off 32 balls and Sean Williams remained unbeaten on 21 as Zimbabwe completed their first ever Twenty20 win over Afghanistan in nine attempts.

Earlier, Rahmanullah Gurbaz made 61 off 47 balls to help Afghanistan to a decent score after skipper Rashid Khan won the toss and elected to bat first.

Gurbaz put 83 runs with fellow opener Hazratullah Zazai (31) before Zimbabwe clawed their way back into the contest through Mpofu.

Leg-spinner Tinotenda Mutombodzi played his part to halt Afghanistan before finishing with 2-18.

"We tried our best. We had a good start but didn't finish off well. That's a part of T20 cricket. We had a good game, will take the positives and will try not to repeat the mistakes," said Rashid.

Afghanistan will face Bangladesh in their last match of the league phase on Saturday at the same venue.

Hamilton Masakadza Afghanistan vs Zimbabwe, Match 5
Get the latest updates on ICC Women's Cricket World Cup 2022 and IPL 2022, check out the Schedule , Live Score and IPL Points Table. Like us on Facebook or follow us on Twitter for more sports updates. You can also download the NDTV Cricket app for Android or iOS.