Supernovas suffered a two-run defeat to Trailblazers in the first match of the Women's T20 Challenge at the Sawai Mansingh Stadium in Jaipur. 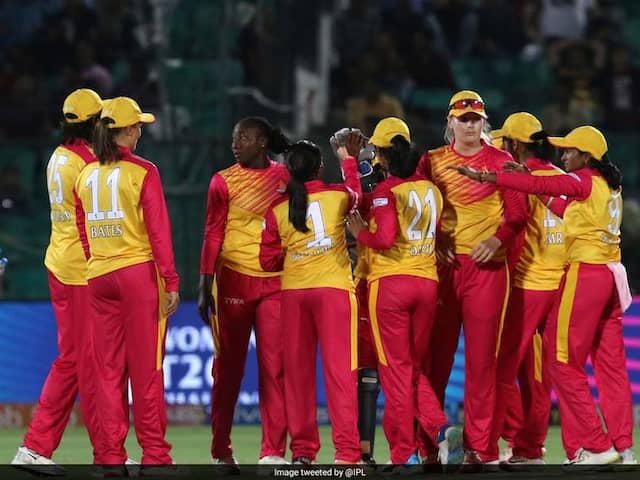 Skipper Smriti Mandhana (90) led from front as Trailblazers defeated Supernovas in a thriller by two runs in the first match of Women's T20 challenge at the Sawai Mansingh Stadium in Jaipur on Monday. Chasing 141 runs, Supernovas got off to a poor start, losing their opener Priya Punia in the second over. Following the dismissal, Chamari Athapaththu and Jemimah Rodrigues stitched a partnership of 49 runs for the second wicket, which ended after the latter perished for 24 runs. Later, Athapaththu (26 off 34) and Natalie Sciver (1 off 4) both departed inside two overs, leaving the chase in jeopardy.

Next in, skipper Harmanpreet Kaur (46 off 34) and Sophie Devine (32 off 22) brought their side back in game and at one time they were right on course to win but the 19th over bowled by birthday girl Sophie Ecclestone, where she conceded just two runs, turned the game on its head.

Smriti, who repaired the early damage, faced 67 balls and her knock was laced with 10 boundaries and three hits into the stands.

Put into to bat, Trailblazers lost opener Suzie Bates (1 off 4) early with just 11 runs on the board after 1.3 overs. Anuja Patil who accounted for the wicket of the opener.

The Supernovas, however, failed to make any further inroads soon as the Trailblazers duo of Smriti and Harleen put up 50 runs for the second wicket in 9.4 overs. The duo then helped their side touch the three-figure mark in style as Smriti smashed leggie Poonam Yadav for a six over extra cover in the 16th over.

Pacer Sophie Devine finally came up with the much-needed breakthrough as she dismissed Harleen in the 19th over before Radha Yadav also jolted Trailblazers by sending back a wel- settled Smriti in the final over.

Comments
Topics mentioned in this article
Smriti Mandhana Harmanpreet Kaur Sawai Mansingh Stadium, Jaipur Cricket
Get the latest Cricket news, check out the India cricket schedule, Cricket live score . Like us on Facebook or follow us on Twitter for more sports updates. You can also download the NDTV Cricket app for Android or iOS.