Will Pucovski and Marcus Harris shared in a massive 486-run opening stand for Victoria against South Australia, surpassing the previous mark of 464 set by Steve and Mark Waugh for New South Wales in 1990. 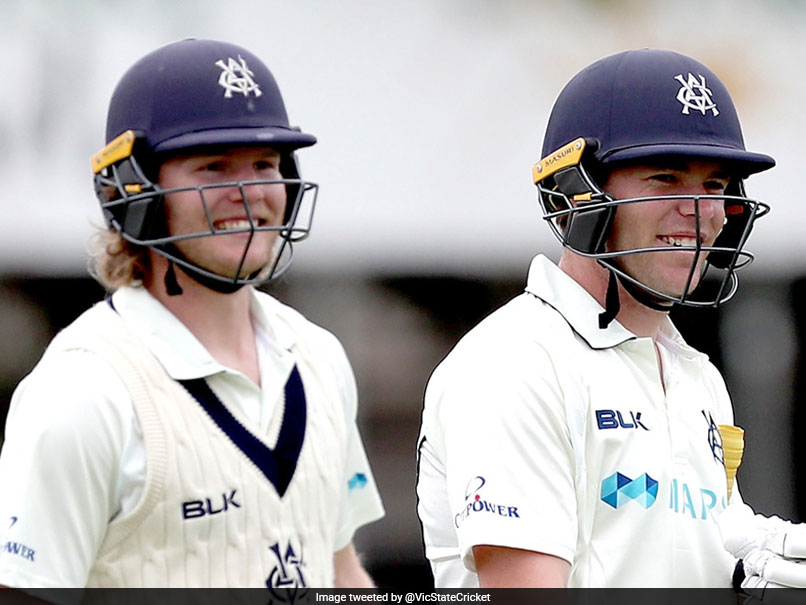 Will Pucovski remained unbeaten on 255, when captain Peter Handscomb declared at 564 for three.© Twitter

Will Pucovski and Marcus Harris smashed double centuries to fire a message to Australia coach Justin Langer in setting a new record Sunday for the biggest partnership in Sheffield Shield history. The pair shared in a massive 486-run opening stand for Victoria against South Australia, surpassing the previous mark of 464 set by Steve and Mark Waugh for New South Wales in 1990. Harris, who has not played a Test since being dropped following the 2019 Ashes against England, finally fell for 239, caught behind off the bowling of Wes Agar.

It left Pucovski in the middle and he remained unbeaten on 255 when captain Peter Handscomb declared at 564 for three.

Their exploits will cause incumbent Test openers Joe Burns and David Warner to sit up and take notice, with Langer's squad for an upcoming four-Test home series against India yet to be announced.

Pucovski, one of Australia's brightest prospects, has been on the cusp of Test selection for the past two summers, but has battled mental health problems.

He was in the national set-up for Tests last summer against Sri Lanka, but after being overlooked for the first and again missing out on selection for the second he was released to return home and deal with his issues.

The 22-year-old said last week he was ready to fight for a Test spot again.

"I just feel like I'm in a really good space now, which is awesome, just in everyday life and with my cricket," he said.

"I don't have much control over whether they pick me or not, but I'm definitely very keen."

Australia Cricket Team Will Pucovski Marcus Harris Steve Waugh Mark Waugh Cricket
Get the latest updates on Fifa Worldcup 2022 and check out  Fifa World Cup Schedule, Stats and Live Cricket Score. Like us on Facebook or follow us on Twitter for more sports updates. You can also download the NDTV Cricket app for Android or iOS.