After dismissing Ireland for just 180, the West Indies reached their target with 100 balls to spare. 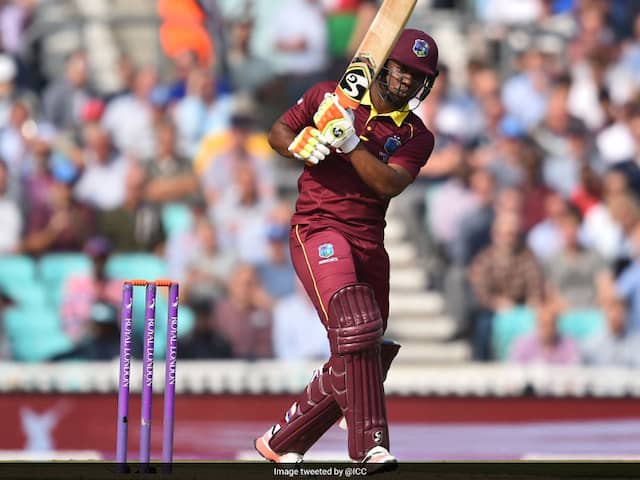 Evin Lewis fell agonisingly short of a century as the West Indies cruised in the chase.© Twitter

Opening batsman Evin Lewis fell agonisingly short of a century as his undefeated 99 helped the West Indies to cruise to a five-wicket win over Ireland in the first one-day international at Kensington Oval on Tuesday. The 28-year-old left-hander made his runs off 99 balls with 13 boundaries and two sixes. After dismissing Ireland for just 180, the West Indies reached their target with 100 balls to spare. For Lewis, it was his eighth ODI half-century but he made a gallant attempt to go to what would have been a third century.

With the scores level, he launched Barry McCarthy over extra cover but his hopes of a six to end the game in style fell just inches short.

Off-spinner Simi Singh was the only Ireland bowler to complete his 10 overs, finishing with 2-44.

Earlier, West Indies fast bowler Alzarri Joseph picked up four wickets as Ireland stumbled to 180 all out in the 47th over.

"For me, it's a really good start to the year," said man-of-the-match Joseph.

"It's about putting in the hard work in training and doing the yards.

"I kind of had an idea of how I wanted to bowl today, and I just kept it simple and bowled to my plans."

Wicketkeeper Lorcan Tucker was Ireland's top scorer with 31 as the tourists collapsed following a solid start at Kensington Oval.

Joseph dismissed opening pair Paul Stirling (15) and debutant Gareth Delaney (19) as well as the dangerous Kevin O'Brien for just four as Ireland slumped from 51-1 to 88-6.

A seventh-wicket stand between Tucker and Mark Adair worth 54 runs restored a glimmer of hope for a side playing their first ODI since July.

Adair hit two fours and a six in a brisk 29 off 34 balls before he was stumped off the bowling of Hayden Walsh, with Tucker soon departing as Joseph struck again.

The three-match ODI series continues at the same venue on Thursday and concludes in Grenada on January 12.

That will be followed by three Twenty20 internationals in Grenada (January 15) and St Kitts (January 18 and 19).

Kevin O'Brien West Indies vs Ireland, 1st ODI Cricket
Get the latest Cricket news, check out the India cricket schedule, Cricket live score . Like us on Facebook or follow us on Twitter for more sports updates. You can also download the NDTV Cricket app for Android or iOS.