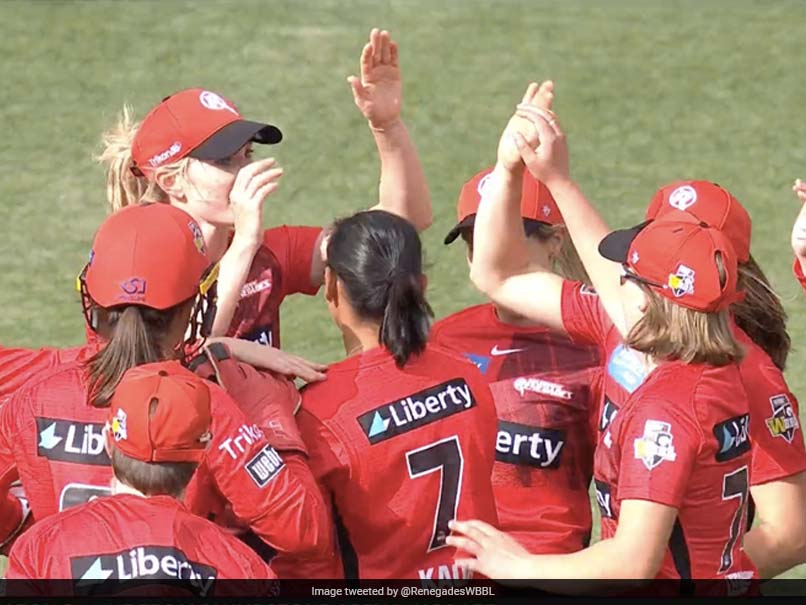 India captain Harmanpreet Kaur held her nerves under pressure while opener Jemimah Rodrigues scored an invaluable 33 as Melbourne Renegades beat hosts Hobart Hurricanes by six wickets in a Women's Big Bash League (WBBL) match on Saturday. Chasing 122, Rodrigues and skipper Sophie Molineaux (16 off 16) shared 22 runs for the opening stand before the latter departed. Rodrigues, whose knock came off 34 balls and was laced with two boundaries and a six, then stitched 68 runs for the second wicket with Courtney Webb (31) before three quick wickets made the chase a little tricky for Renegades.

With pressure building after the loss of quick wickets, the onus was on the experienced Harmanpreet (24 not out off 19) to hold the innings together and get Renegades over the finishing line. The Indian completed the job with four balls in hand and with a bit of support from George Wareham (5 not out) at the other end.

Earlier, Renegades' spin twin of Molineux (2/12) and Wareham (3/13) applied the brakes before bowling out Hurricanes for 121. Harmanpreet also registered her name in the wicket-takers' list, taking the wicket of compatriot Richa Ghosh, who played a 14-ball 21-run cameo.

Meanwhile, in the second match of the day, Smriti Mandhana and Deepti Sharma failed to live up to their reputations as their side Sydney Thunder lost by 30 runs against Adelaide Strikers.

Sent into bat, Adelaide Strikers rode on skipper Tahlia McGrath's 42 and Madeline Penna's 35 to post a competitive 140 for seven. Deepti Sharma turned out to be expensive with the ball, giving away 32 runs from her four overs while accounting for one wicket. While chasing, the Indian duo of Mandhana (4) and Deepti (4) failed to sparkle with the bat as Sydney Thunders were bowled out for 110.

Both the matches were played behind closed doors under strict bio-security protocols after the state of Tasmania went into a three-day lockdown on Friday following a Covid scare.

Comments
Topics mentioned in this article
Harmanpreet Kaur Smriti Mandhana Deepti Sharma Cricket
Get the latest updates on IPL Auction 2023 and check out  IPL 2023 and Live Cricket Score. Like us on Facebook or follow us on Twitter for more sports updates. You can also download the NDTV Cricket app for Android or iOS.