South Africa, with their eight wicket win on Saturday, have taken a 1-0 lead in the five-match One-Day International series against Sri Lanka. 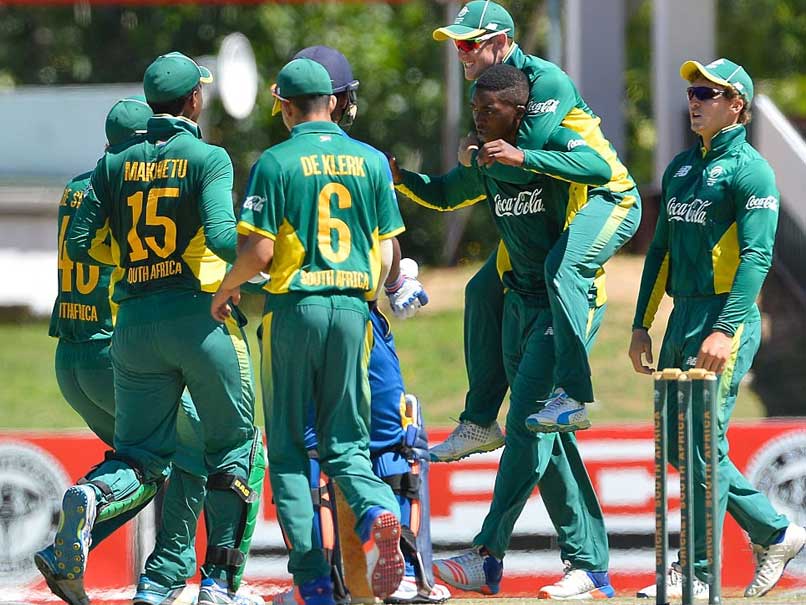 South Africa have taken a 1-0 lead in the five-match ODI series.© ICC/Twitter

South Africa eased to an eight-wicket victory over Sri Lanka in the first One-Day International (ODI) to take a 1-0 lead in the five-match series at Port Elizabeth on Saturday. Wayne Parnell and Imran Tahir took three wickets each to set up a comfortable win for the hosts at St George's Park. Sri Lanka struggled to 181 all out with Kusal Mendis the only batsman to shine for the tourists, making 62. Left-arm seamer Parnell took three for 48 while leg-spinner Tahir showed superb control in a strong westerly wind, taking three for 26.

Hashim Amla made 57 and Faf du Plessis 55 not out as South Africa cruised to victory with 15.4 overs to spare.

Parnell plunged Sri Lanka into early trouble by taking wickets with the first balls of the second and fourth overs after South African captain AB de Villiers won the toss and decided to bowl.

Although Dinesh Chandimal and Mendis put on 72 for the third wicket, Tahir ripped the heart out of the middle order, taking three wickets in four overs.

"It was a great bowling performance which put them on the back foot," said De Villiers. "The new ball bowlers bowled with a lot of intensity up front, which is exactly what we want from them, and Immy (Tahir) was a great impact bowler in the middle overs again."

Congratulations on the Man of the Match award to Imran Tahir for a thoroughly impressive bowling display! #SAvSL pic.twitter.com/9UdMcx6DnB

"Although Sri Lanka's total was well below par, it was still a tricky target on a pitch which was slow, two-paced and kept really low.

"It was more like Sri Lankan conditions and their spinners could have caused some problems. But Quinton and Hash got us off to a great start, which made it easy for Faf and me," said De Villiers, who made 30 not out.

Sri Lankan captain Upul Tharanga was disappointed. "Although Dinesh and Mendis had a partnership, we never picked up from losing early wickets," he said. "It was a slow pitch but our spinners did not control the ball much. We need to improve in batting and bowling."

Niroshan Dickwella, man of the series in Sri Lanka's Twenty20 triumph, made only one before he went back on his stumps and was leg before wicket to Parnell. New cap Sandun Weerakkody slashed at the first ball of Parnell's next over and was caught at first slip for five.

Mendis, who had made only 87 runs in seven innings since hitting 58 in the second innings of the first Test at the same venue last month, hit ten boundaries in his 94-ball innings. His first seven scoring strokes were fours, mainly struck fluently on the off side.

Comments
Topics mentioned in this article
South Africa Cricket Team Sri Lanka Cricket Team Wayne Parnell Imran Tahir St Georges Park, Port Elizabeth Cricket
Get the latest updates on India vs Australia Series, check out the India vs Australia Schedule for 2020-21 and Ind vs Aus live score . Like us on Facebook or follow us on Twitter for more sports updates. You can also download the NDTV Cricket app for Android or iOS.