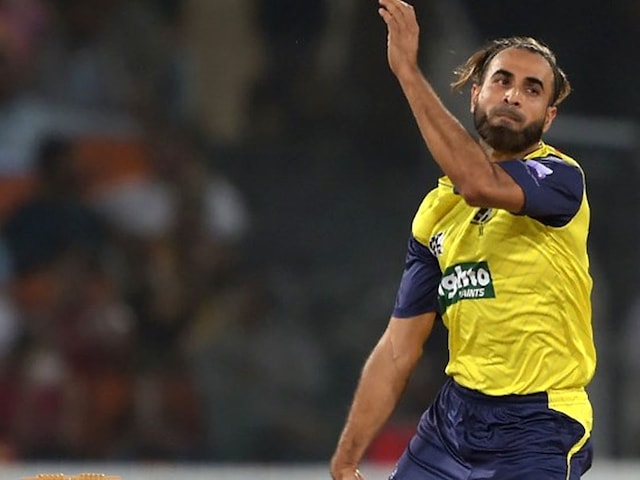 Imran Tahir was part of the World XI squad that played three T20s against Pakistan.© AFP

The spirit of cricket came to the fore when a World XI side reignited international cricket in Pakistan by visiting the country to play a three-match Twenty20 series. Most of the world stars made it clear that the tour of Pakistan was not just about playing a series but way bigger than that. The curtains drew on the tournament on Friday evening as Pakistan beat World XI to clinch the series 2-1. But it seems the bonhomie between the two set of players has only strengthened and that was seen when South African ace Imran Tahir was seen giving bowling lessons to Pakistan leggie Shadab Khan.

Post the final T20I in Lahore, Tahir was seen giving intructions to Shadab on how to bowl a particular delivery and the Pakistani spinner was all ears.

Sami Ul Hasan, ICC's Head of Media and Communications, posted a video on Twitter with a caption: "Imran Tahir sharing knowledge and experience with Shadab Khan."

Twitter applauded Tahir's gesture and praised him for being the perfect role model.

Imran tahir is such a humble man...

This clip made my day

You are Imran Tahir

Pakistan beat World XI by a thumping 33 runs in the final Twenty20 today to clinch a three-match series which marked the return of international cricket to the country on Friday. Set a target of 184 to win, the World XI only managed 150-8 at Lahore's Gaddafi Stadium to concede the series to the home team by 2-1.

The hosting of the short series is a major step towards convincing international teams to begin touring Pakistan again, with Sri Lanka already due to play a Twenty20 match in Lahore on October 29.

Foreign teams have refused to tour Pakistan since a militant attack on the Sri Lankan team bus in Lahore in March 2009.

Comments
Topics mentioned in this article
South Africa Cricket Team Pakistan Cricket Team Imran Tahir Shadab Khan Cricket
Get the latest updates on IPL 2020, check out the IPL Schedule for 2020 and Indian Premier League (IPL) Cricket live score . Like us on Facebook or follow us on Twitter for more sports updates. You can also download the NDTV Cricket app for Android or iOS.