Hardik Pandya and Natasa Stankovic were delighted at the sight of their son Agastya "on the move". 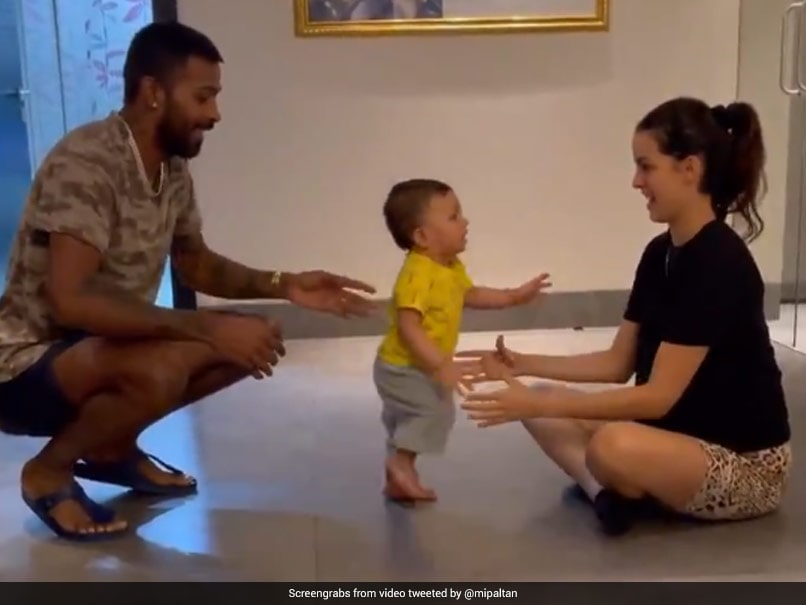 Hardik Pandya and Natasa Stankovic's son Agastya, who was born in July 2020, was seen taking a few steps towards his mother, leaving the parents delighted. Hardik's Indian Premier League (IPL) team Mumbai Indians (MI) posted a video on social media where Agastya is seen walking, rather scurrying, towards his mother with some support from the father. "Baby Pandya is on the move," wrote MI in the caption as both Hardik and Natasa aided their child's steps. India cricketer Hardik may have some more time to spend with family now after Indian Premier League (IPL) 2021 was postponed earlier this month due to COVID-19 cases among players and support staff across teams.

The all-rounder was not named in the 20-strong Indian Test squad for the tour of the United Kingdom. India will play New Zealand in the final of the World Test Championship in June followed by a five-match Test series against England starting August.

However, Pandya could be on the plane to Sri Lanka with the Indian limited-overs teams as India are slated to play Sri Lanka for a white-ball series in July.

That series will probably not have the Test specialists and all-format players who would be in England at the time.

Hardik had middling returns in IPL 2021 with 52 runs at a lowly strike rate of 118.18. He did not bowl in the tournament at all, part of which was due to a "shoulder concern", as revealed by MI director of cricket Zaheer Khan in April.

Hardik's inability to complete his quota of overs consistently since his return from a back surgery in 2019 has raised questions over his place in the limited-overs teams.