"Was My Opportunity To Step Up", Says Virat Kohli After Match-Winning Century

India skipper Virat Kohli ended a run of 11 innings without a century as he smashed a sensational 120-run knock in the second ODI. 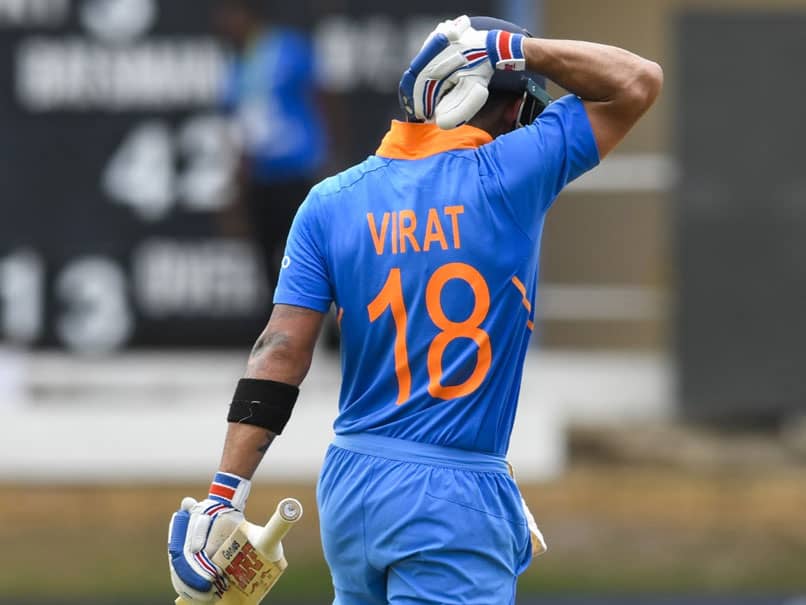 Virat Kohli smashed 14 boundaries and a six in his 120-run knock.© AFP

India skipper Virat Kohli yet again showed his brilliance with the bat, smashing a brilliant 120 off 125 balls after openers Shikhar Dhawan and Rohit departed early in the rain-hit second ODI of the three-match series against the West Indies in Port of Spain on Sunday. He along with Shreyas Iyer shared a 125-run stand for the fourth wicket and helped India post a competitive total of 279 for seven in 50 overs. After the win, Virat Kohli admitted that it was his turn to rise to the occasion after the fall of early wickets. He said that somebody from the top three had to step up and it was his opportunity to do so.

Thanks to the contributions of Kohli, Shreyas Iyer and Bhuvneshwar Kumar, India won by 59 runs via the DLS method against the West Indies.

"We knew that anything over 270 would be challenging. It feels good to get a hundred when the team wanted me to get one," Kohli said after the win which gave the tourists a 1-0 lead in the three-match series.

"Shikhar and Rohit didn't get a big one. One of the top three has always got the big one. A senior man had to step up and today was my opportunity to step up. It was important to string in a lot of dot balls," he added.

Kohli had a relatively quiet World Cup and this was his first century since March. En route, he surpassed former captain Sourav Ganguly to become India's second highest run-getter in ODIs.

The India skipper also shattered a 26-year-old record when he surpassed Pakistan's Javed Miandad for most runs by any batsman in ODIs against the West Indies.

Kohli said it was a good toss to win as the wicket became difficult in the second innings.

"Good outing with the bat. Exactly why we wanted to bat first. If you saw the later half of the West Indies innings, it was difficult to bat on. I think the rain in between helped them else it would have been tough to bat in the middle," he said.

"The batting became a little easy thanks to the rain when (Shimron) Hetymer and (Nicholas) Pooran were batting together.

"It was tough gripping the ball when it went into the outfield. It was about staying in there and hoping one wicket will put pressure on them and luckily we got the wickets."

Kohli said the number of left-handers in the West Indies team prompted him to play Kuldeep Yadav in place of Yuzvendra Chahal.

"The number of left-handers work in favour of Kuldeep and that's why we went in with him rather than Chahal. He is more lethal against the left-handers because of his variations and the lines that he bowls to them," he said.

"Kedar (Jadhav) was precise as well. With the number of left-handers, you want to go with a chinaman bowler rather than a leggie. With Jadeja playing, it helps our balance."

The skipper lauded Shreyas Iyer, who made a crucial 71 on Sunday.

"He (Iyer) is a very confident guy and has the right attitude. Really got the tempo going and took the pressure off me. After I got out, he got the extra runs as well," Kohli said.

West Indies captain Jason Holder said losing the last six wickets for just 62 runs cost his side the match. West Indies were comfortably placed at 148 for four after the 27th over before they lost wickets in quick succession to be bundled out for 210 in the 42nd over.

"Extremely disappointing. We bowled really well and the game was in our hands. We lost crucial wickets at the back end to lose the game. "We need to take responsibility. We need to take the game deep. The pitch was pretty good and the bowlers despite the humid conditions did well. The batters have to take the responsibility. They have been letting us down far too often," Holder said.

Virat Kohli West Indies vs India 2019 West Indies vs India, 2nd ODI Cricket
Get the latest updates on IPL 2020, check out the IPL Schedule for 2020 and Indian Premier League (IPL) Cricket live score . Like us on Facebook or follow us on Twitter for more sports updates. You can also download the NDTV Cricket app for Android or iOS.