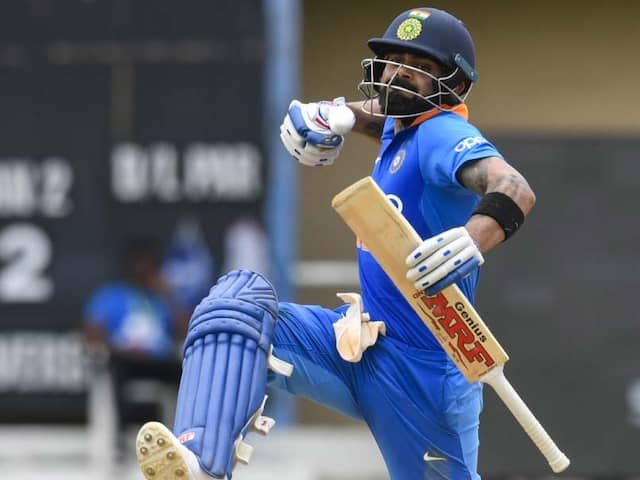 Virat Kohli smashed 14 boundaries and a six in his 120-run knock.© AFP

India skipper Virat Kohli ended a run of 11 innings without a century as he smashed a stupendous 120-run knock in the second ODI of the three-match series against the West Indies in Port of Spain on Sunday. Virat Kohli's compatriot Bhuvneshwar Kumar, who claimed four wickets in the rain-hit game, heaped praise on the India skipper, saying his hunger for a century was visible in his celebrations after reaching the magical three-figure mark. Despite scoring five half-centuries, Virat Kohli had failed to score a ton in the recently-concluded World Cup 2019.

Virat Kohli not only ended his drought for an ODI hundred, but also went past Sourav Ganguly on the list of most runs scored in ODIs.

"From Virat's expression you know he badly wanted to score a hundred, not because he was out of form but because he was getting out on 70s and 80s. He is always known for scoring big runs," said Kumar speaking at the post-match press conference.

Earlier in the day, Kohli stroked his 42nd ODI century to pave way for India's 279/7. He stitched a 125-run stand with Shreyas Iyer for the fourth wicket.

The Delhi Capitals captain, returning to the ODI side in this series after almost 18 months, registered his third half-century in his sixth innings to help consolidate India's position after they were reduced to 101 for 3 in the 23rd over. In a 68-ball knock, he smashed five boundaries and a six as he amassed 71.

Bhuvneshwar Kumar then returned with figures of 4/31 in his allotted 8-over spell and helped India bowl out the West Indies for 210 in 42 overs, who were given a revised target of 270 in 46 overs after a brief interruption due to rain.

"It was a crucial partnership with Virat. It wasn't an easy wicket to bat on. He (Iyer) played with a lot of maturity," said Kumar while praising Iyer.

Meanwhile, the India skipper said it wasn't an easy wicket to bat on and thus, it was pertinent for one of the top three to get a big score.

"It was a good outing with the bat," Kohli said at the post-match presentation. "It feels good to get a hundred when the team wanted me to get one. Shikhar and Rohit didn't get a big one. One of the top three has always got the big one. A senior man had to step up and today was my opportunity to step up."

Kohli was also full of praise for Iyer and added, "He (Iyer) is a very confident guy and has the right attitude. He really got the tempo going and took the pressure off me. After I got out, he got the extra runs as well."

Both the teams will remain in Trinidad for the final match of the ODI series to be played on Wednesday, with the hosts having an opportunity to level the contest while the Indian team will aim for another commanding performance to seal the three-match rubber.

Bhuvneshwar Kumar West Indies vs India 2019 West Indies vs India, 2nd ODI Cricket
Get the latest Cricket news, check out the India cricket schedule, Cricket live score . Like us on Facebook or follow us on Twitter for more sports updates. You can also download the NDTV Cricket app for Android or iOS.