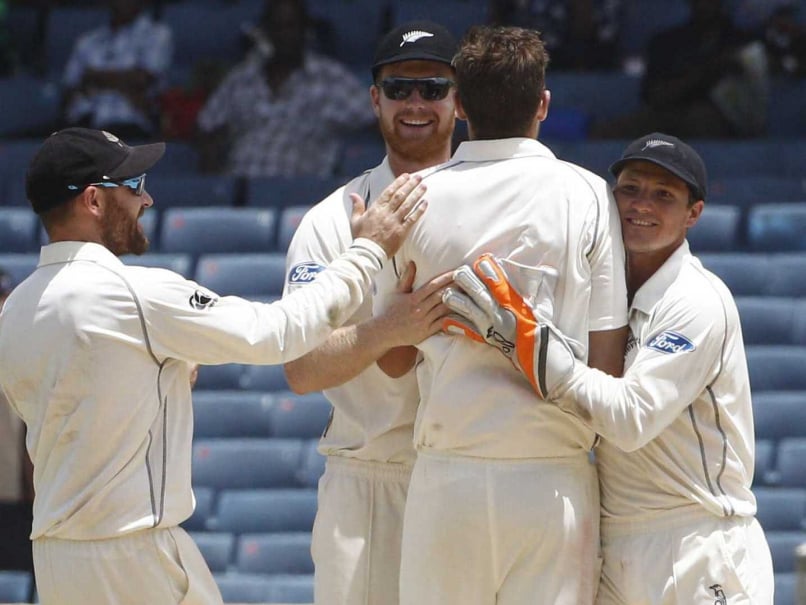 Pacers Tim Southee and Trent Boult bowled New Zealand to a 2-1 series victory on Monday with a tense 53-run win over West Indies late on the fifth and final day of the rain-hit third test.

All-rounder Jason Holder top-scored for the West Indies with 52. Darren Bravo (40), Shane Shillingford (30 not out), captain Denesh Ramdin (29) and Shivnarine Chanderpaul (25) also got starts without carrying on.

"We're really thrilled with how we've managed to come out of this series with a win," said New Zealand skipper Brendon McCullum. "This series is groundbreaking for this group. We're very proud of what we've been able to achieve and I can think of worse places than Barbados to be able to celebrate it."

McCullum's declaration set the hosts an enticing target of 308 in a possible 98 overs and his new ball pair of Boult and Southee gave him the best possible start.

Boult struck in his second over when Kraigg Brathwaite (6) played no stroke to a big inswinger and lost his off stump after the ball kissed his pad to make it 7-1.

It was soon 23-2 when Boult got Kirk Edwards out to a low first slip catch by Ross Taylor.

Southee claimed the prize wicket of Chris Gayle soon afterward as the powerful left-hander was bowled off pad and bat as he aimed an expansive drive to leave the hosts in serious trouble at 31-3.

But veteran Shivnarine Chanderpaul and fellow left-hander Darren Bravo added 50 either side of lunch to revive home hopes.

Craig finally ended the resistance of Chanderpaul when the veteran was stumped for the first time in his 156-test career. The left-hander hit two fours off 70 deliveries before falling at 81-4.

There was another defiant stand between Bravo and Ramdin and a short rain delay also threatened to stall New Zealand.

But after putting on 41, both batsmen fell in quick succession.

Craig soon claimed Kemar Roach, on his 26th birthday, to a bat-pad catch to Tom Latham at short leg at 144-7.

But Holder and Shillingford put on a defiant 77 for the eighth wicket to raise flickering hopes of a miraculous win.

Holder, on debut, hit three fours and a six off 79 balls for his maiden test 50 before falling to Craig. Holder was bowled through his legs by one that kept low.

Wagner brought New Zealand closer when he claimed Sulieman Benn to a catch at extra cover by Southee at 232-9.

Just after the start of the final hour, Boult provided the decisive blow when an inswinging yorker trapped Jerome Taylor plumb in front to give New Zealand the test and series.

Comments
Topics mentioned in this article
West Indies Cricket Team New Zealand Cricket Team Cricket
Get the latest updates on ICC Women's Cricket World Cup 2022 and IPL 2022, check out the Schedule , Live Score and IPL Points Table. Like us on Facebook or follow us on Twitter for more sports updates. You can also download the NDTV Cricket app for Android or iOS.