The PCB, in its press release, said that all three players showed no symptoms prior to their testing in Rawalpindi on Sunday. 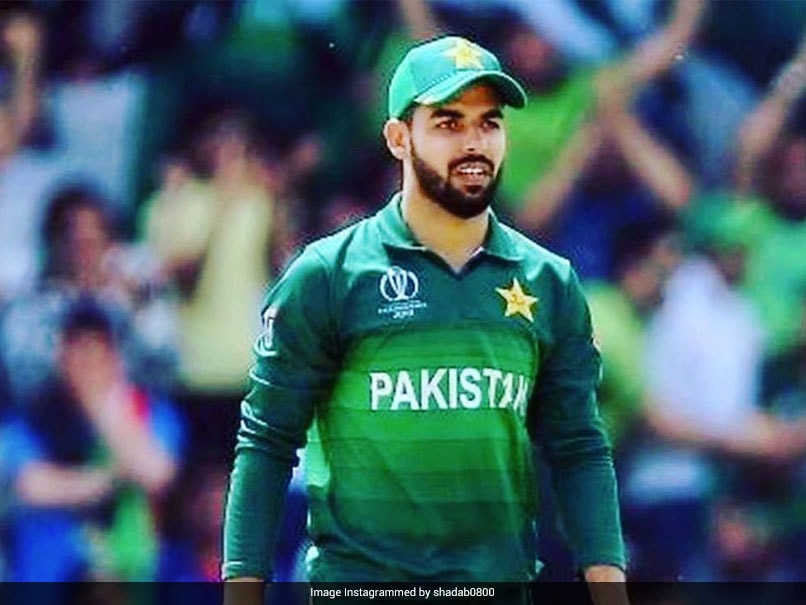 Shadab Khan was among three Pakistani cricketers who tested positive for coronavirus.© Instagram

The Pakistan Cricket Board(PCB) on Monday confirmed that three players all-rounder Shadab Khan  uncapped teenage batsman Haider Ali and fast bowler Haris Rauf have tested positive for the coronavirus. The PCB, in its press release, said that all three players showed no symptoms prior to the testing they underwent in Rawalpindi on Sunday. "The Pakistan Cricket Board has confirmed three players - Haider Ali, Haris Rauf and Shadab Khan - have tested positive for Covid-19," the PCB said in a release.

"The players had shown no symptoms until they were tested in Rawalpindi on Sunday ahead of the Pakistan men's national cricket team's tour to England," it added.

The PCB also added that the players have been advised to self-isolate themselves with immediate effect.

"The PCB medical panel is in contact with the three who have been advised to immediately go into self-isolation," read the statement.

Two other players Imad Wasim and Usman Shinwari who also underwent the test in Rawalpindi have tested negative for the virus. Both of them will travel to Lahore on June 24 before leaving for the England tour.

"Imad Wasim and Usman Shinwari, also screened in Rawalpindi, have tested negative and, as such, will travel to Lahore on 24 June," it added.

The PCB also stated that all the other players and team officials except senior cricketer Shoaib Malik, bowling coach Waqar Younisand Cliffe Deacon got themselves tested at their respective centres, and their results are expected to arrive on Tuesday.

"The other players and team officials, barring Cliffe Deacon, Shoaib Malik and Waqar Younis, underwent tests at their respective centres in Karachi, Lahore and Peshawar on Monday," it added.

Pakistan are due to travel to England on June 28 for a bio-secure tour comprising three Tests and as many Twenty20 Internationals (T20Is).

The Test series will start with Manchester's Old Trafford stadium hosting the first match from August 5-9, while the second and third Test will be played in Southampton from August 13-17 and 21-25 respectively.

The three T20Is will all be played in Southampton on August 28, 30 and September 1.

Shadab Khan Haris Rauf Haider Ali Pakistan Cricket Board Cricket
Get the latest updates on ICC T20 Worldcup 2022, check out the Schedule and Live Score. Like us on Facebook or follow us on Twitter for more sports updates. You can also download the NDTV Cricket app for Android or iOS.