It will be the last chance for the domestic players to impress before the all-important IPL auction when the knockouts of the Syed Mushtaq Ali Trophy begin. 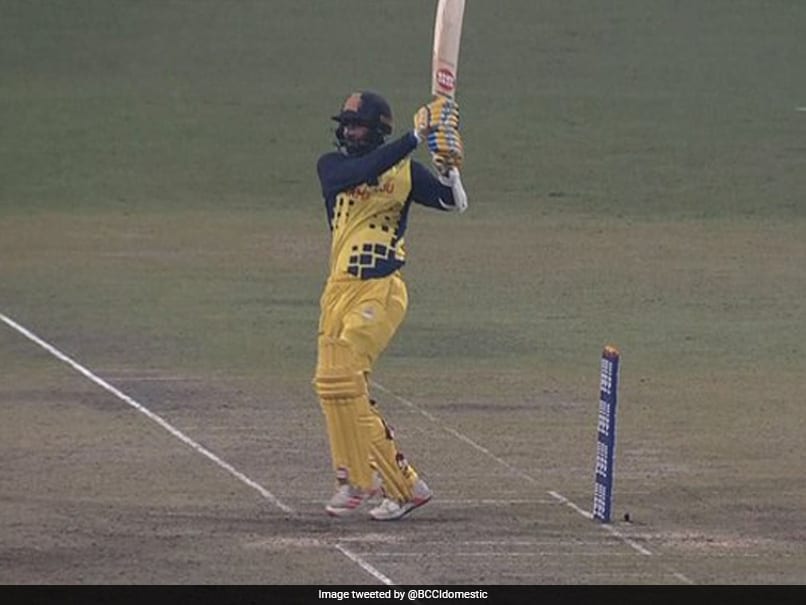 Tamil Nadu opener N Jagadeesan is the leading run-getter in the tournament so far with 315 runs.© BCCI/Twitter

It will be the last chance for the domestic players to impress before the all-important Indian Premier League (IPL) auction when the knockouts of the Syed Mushtaq Ali Trophy begin in Ahmedabad from Tuesday. While Karnataka will go all out looking to retain the title, the seven other teams which have made it to the quarter-finals, will be itching to make an impact and get their names inscribed on the trophy. The event marked the resumption of the much-delayed 2020-21 domestic season in the country.

A mighty Punjab team stands between Karnataka and their title defence as the two teams will square-off in the first quarter-final, which is expected to be an even battle.

Punjab made it to the knockouts from Elite Group A after winning all their five games in the league stage, while Karnataka reached the final eight, despite being second on the points table in Group A, having lost one game.

The match could be touted as battle of openers as Punjab possess the young Prabhsimran Singh, who is in good form, with 277 runs, while Karnataka will bank on the stylish southpaw Devdutt Padikkal, who has 207 runs from five games.

Both the sides have an equally strong middle-order. However, Punjab could have a slight edge in their pace attack with Sidharth Kaul (10 wickets) and Sandeep Sharma in their arsenal.

Sandeep Sharma in particular is lethal in the shortest format of the game. But Karnataka have the likes of Abhimanyu Mithun and Prasidh Krishan, who can be equally dangerous.

Even the contest among the spinners is somewhat equal as Punjab has Mayank Markande while Karnataka will bank on the lead spin duo of experienced J Suchith and Shreyas Gopal.

In the second quarter-final, for Tamil Nadu, who were runners-up last season, attacking opener N Jagadeesan, who is the leading run-getter in the tournament so far with 315 runs and skipper Dinesh Karthik, will again be the key players in their clash against Himachal Pradesh, who came through from Elite Group C.

The Tamil Nadu bowling unit did a superb job for skipper Karthik though it was without ace spinner R Ashwin, yorker specialist T Natarajan and all-rounder Washington Sundar who were away on national duty in Australia.

Leg-spinner M Ashwin and left-arm spinner R Sai Kishore were quite a handful but it was Baba Aparajith, who was the surprise package, taking the new ball and enjoying a great degree of success too.

The trio will have a crucial role to play in the knockouts if Tamil Nadu have to go all the way as would the pacers-Sandeep Warrier, M Mohammed and Aswin Crist.

In the third quarter-final too, it could be tough for Baroda to overcome the challenge of Haryana, without the services of the Pandya brothers – Hardik and Krunal.

While Hardik did not play the tournament as he was practicing for the white-ball series against England, Krunal had to leave the tournament midway following his father's demise.

Haryana have been in splendid form and it is their spinners –- India player Yuzvendra Chahal, Jayant Yadav and Rahul Tewatia, who will give them an upper hand against Baroda.

But Baroda led by Kedar Devdhar, who has amassed 226 runs in five games, can spring a surprise. And for that to happen, left-arm inform pacer Lukman Meriwala (11 wickets) and Atit Sheth (8 wickets) hold the key against a vulnerable Haryana top-order.

In the fourth quarter-final, Rajasthan, who qualified from Group D, will be the run-away favourites against Bihar, who have qualified from the Plate Group.

The Syed Mushtaq Ali Trophy knockouts, will also be the first time that matches will be played at the refurbished Sardar Patel Motera Stadium.

It will be interesting to see how the pitch behaves with the two Tests between India and England to follow at the venue.