The cricketers share some laughs before the serious business begins again. 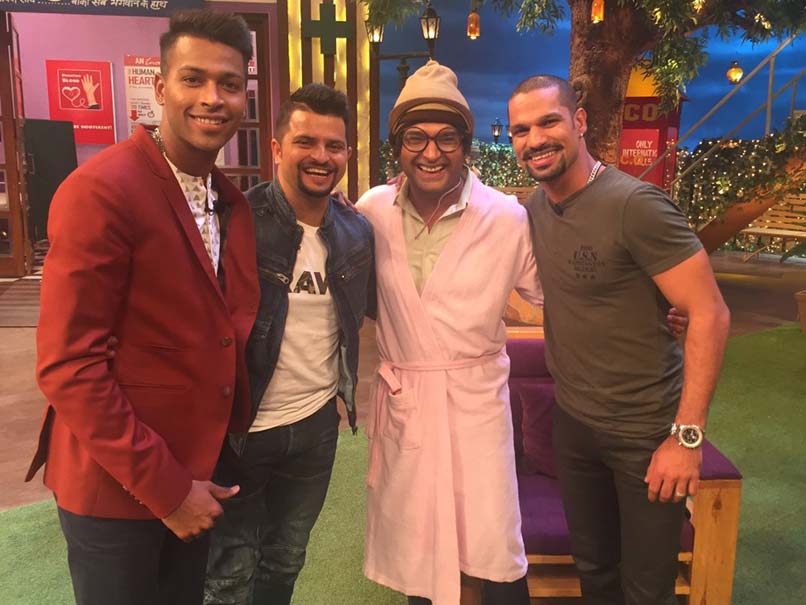 Free time is always at a premium for cricketers, especially Indian cricketers, who are involved in some tournament or the other at any time of the year. No sooner than the Indian Premier League (IPL) ended, they were all set for the ICC Champions Trophy 2017. But whatever little time they get, the players tend to still be in the thick of things. Suresh Raina, Hardik Pandya and Shikhar Dhawan found themselves in The Kapil Sharma Show during their free time and obviously they had a blast.

Hardik Pandya tried his version of comedy. "Stumped, caught and bowled with laughter! ...Guys, can you guess where am I? ??Outfit by @tisastudio."

Stumped, caught and bowled with laughter! Guys, can you guess where am I? Outfit by @tisastudio

Raina too was in the thick of things. "Good fun at Kapil Sharma show#fun #laughinghard #fullmasti ...."

Seems like these shows have their own attraction, with other players too having been seen on the show.

Yuvraj Singh, with wife Hazel Keech, was seen here. On another occasion, current India captain Virat Kohli was also on the show.

Raina led Gujarat Lions in the IPL, while Pandya was a key member of the champion Mumbai Indians side. Dhawan was one of the key batsmen for Sunrisers Hyderabad.

Pandya and Dhawan are also part of the Indian squad for the Champions Trophy, beginning in the England and Wales from June 1. The Indian cricket team will start their campaign against Pakistan on June 4.

Comments
Topics mentioned in this article
India Cricket Team Suresh Raina Hardik Pandya Shikhar Dhawan Cricket
Get the latest updates on IPL 2020, check out the IPL Schedule for 2020 and Indian Premier League (IPL) Cricket live score . Like us on Facebook or follow us on Twitter for more sports updates. You can also download the NDTV Cricket app for Android or iOS.