The result ensured a seventh successive home series win for South Africa, who won the first Test in Centurion by six wickets. 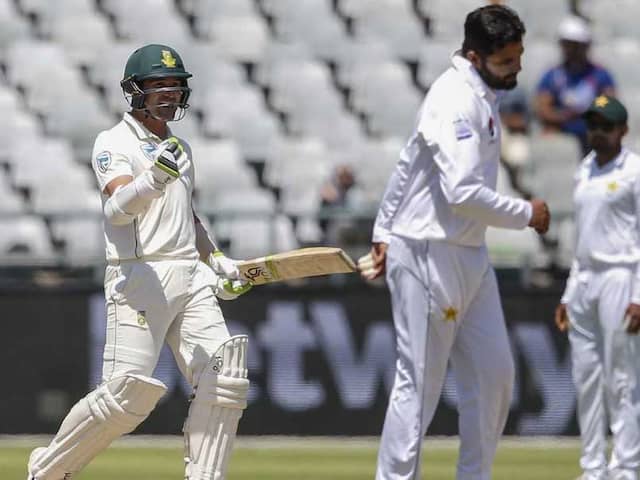 South Africa beat Pakistan by nine wickets on the fourth day of the second Test at Newlands on Sunday. Pakistan claimed a wicket and forced Hashim Amla to retire hurt before South Africa passed their meagre target after less than an hour's play at Newlands. Set 41 to win, South Africa reached 43 for the loss of one wicket from 9.5 overs. The result ensured a seventh successive home series win for South Africa, who won the first Test in Centurion by six wickets. The third and final Test starts in Johannesburg on Friday.

Regular South African opening batsman Aiden Markram did not bat after suffering a severely bruised right thigh when he fell heavily on the boundary rope while fielding on Saturday.

Theunis de Bruyn, opening in place of Markram, clipped Mohammad Abbas to the midwicket boundary but did not add to his score before being caught off his glove by wicketkeeper and captain Sarfraz Ahmed while attempting to pull a bouncer from Abbas.

Mohammad Amir effectively conceded 10 runs in extras off two successive deliveries, with a wide and a no-ball which both flew over Sarfraz's head.

Hashim Amla was forced to retire hurt on two after being hit on the right upper arm by a ball from Amir which lifted sharply off a good length.

Dean Elgar, who made 24 not out, ended the match by hitting two fours off part-time bowler Azhar Ali.

Hashim Amla Aiden Markram Cricket
Get the latest Cricket news, check out the India cricket schedule, Cricket live score . Like us on Facebook or follow us on Twitter for more sports updates. You can also download the NDTV Cricket app for Android or iOS.