The deciding match will be played in Cape Town on Wednesday. 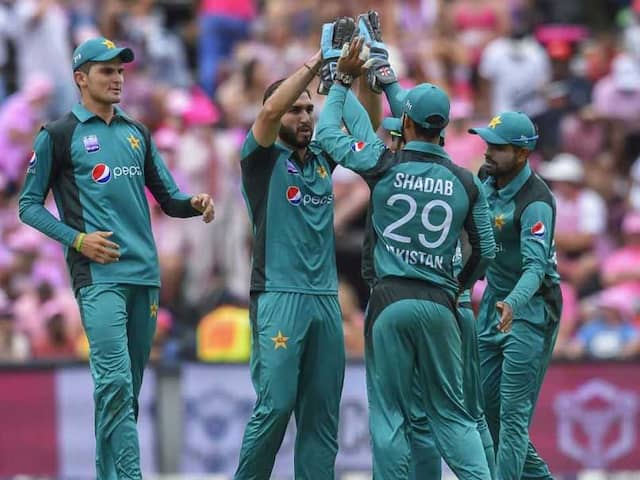 Pakistan's Usman Shinwari was adjudged player of the match for figures of 4/35.© AFP

Pakistan shrugged off a four-match suspension imposed on captain Sarfraz Ahmed with a crushing eight-wicket win over South Africa in the fourth one-day international at the Wanderers Stadium on Sunday. The result levelled the five-match series at 2-2. The deciding match will be played in Cape Town on Wednesday. Pakistan's bowlers set up the win, bowling out South Africa for 164. Imam-ul-Haq made 71 before playing a loose shot when the scores were level as Pakistan cruised to victory with 18.3 overs to spare.

Stand-in captain Shoaib Malik said at the after-match presentation that Pakistan only found out after they arrived at the ground that Sarfraz had been banned under the International Cricket Council's anti-racism code for remarks aimed at South African all-rounder Andile Phehlukwayo during the second match in Durban on Tuesday.

The ban had still not been announced by the ICC when Malik walked out for the toss.

Malik handled his bowlers and fielders astutely and South Africa were kept under pressure almost from the time he won the toss and sent them in on a pitch which had early life.

"It is a great honour to represent your country, as a player or a captain," said Malik. "When the responsibility comes you should make sure to give it your best shot."

Shaheen Shah Afridi made two early strikes before Hashim Amla (59) and captain Faf du Plessis (57) made half-centuries and put on 101 for the third wicket.

Malik's use of spinners Imad Wasim and Shadab Khan kept the scoring rate in check and both batsmen fell to the slow men before the fast bowlers returned.

Mohammad Amir dismissed the dangerous David Miller before fellow left-arm fast bowler Usman Shinwari claimed four wickets in six balls. He finished with four for 35 and was named the man of the match.

Shinwari had Rassie van der Dussen caught behind for 18 and bowled Dale Steyn for a two-ball duck. Kagiso Rabada was caught behind first ball and Beuran Hendricks survived an appeal for leg before wicket with what Shinwari hoped was the hat-trick ball.

The ball was crashing into the stumps but Shinwari acknowledged that umpire Bongani Jele had made the right decision because there was a faint inside edge.

Du Plessis gave credit to Pakistan's bowlers but said it was not a typical Wanderers pitch. "The ball spun quite a lot and was sticking in the surface," he said. "But you have to adapt. They have fantastic bowlers and they are putting pressure on us."

Malik deflected praise for the way the Pakistan players had shown energy and commitment in the field. "Not just today, in the previous games as well," he said. "You need a bit of luck to get across the line. We are all professionals and today our bowling attack did the job and they took wickets."

Imam, the top scorer in the series, looked in control from the start of Pakistan's reply. He and Fakhar Zaman (44) put on 70 for the first wicket before he was joined by the in-form Babar Azam, who finished with 41 not out.

It was South Africa's first defeat in eight matches on what has become known as 'Pink Day' with their players and many spectators dressed in pink in aid of breast cancer awareness.