Rassie van der Dussen, who was making his Test debut, shared a crucial second-innings partnership of 91 runs with Anrich Nortje in the first Test in Centurion. 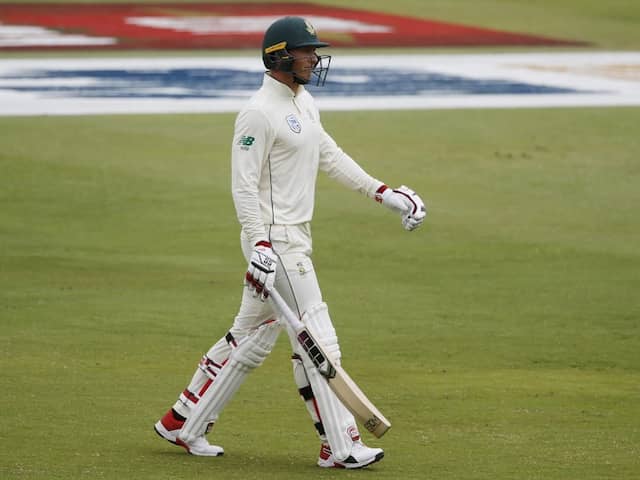 Rassie van der Dussen will remain in the South Africa side for the second Test with England.© AFP

Rassie van der Dussen will remain in the South Africa side for the second Test with England at Newlands after his impressive debut display in his team's opening win, keeping Temba Bavuma out despite his return to fitness from a hip injury. Bavuma will not have the chance to repeat his Newlands heroics against England from four years ago, when his thrilling century made him the first black African to make a hundred for South Africa. The decision to overlook Bavuma for a white player may cause some controversy in view of an official target of having two black Africans in the national team. Kagiso Rabada is now the only black representative.

"Temba passed his fitness test. But we think it is the right thing to do to give Rassie an extended run," said captain Faf Du Plessis.

"Temba is on board with the process that we are part of to try to get guys to score big runs. Temba will be released to play some four-day (domestic) cricket and it is a great opportunity for him to score some runs."

Asked what message he had for black followers of the game, Du Plessis insisted the decison to keep Bavuma out was a purely cricketing one.

"We don't see colour. Opportunity is very important. Temba will be the first guy to acknowledge that he got a really good opportunity," he said.

"There will be things in place to make sure we keep producing players of all colours but right now we need to win Test matches."

Bavuma has been a regular in the Test side since his hundred at Newlands in 2016 but has been unable to reach three figures again. He went through a slump in 2019, scoring only 258 runs in seven Tests at an average of 19.84.

"If you're not in the Test team right now it's about weight of runs," said Du Plessis. "Unfortunately Temba was injured before the series but it was a chatting point before the series about the competition for places."

Van der Dussen, who was making his Test debut, shared a crucial second-innings partnership of 91 runs with Anrich Nortje in the first Test in Centurion.

The vacancy in the batting order caused by Aiden Markram's broken finger will be filled by new cap Pieter Malan, a specialist opening batsman and a like-for-like replacement.