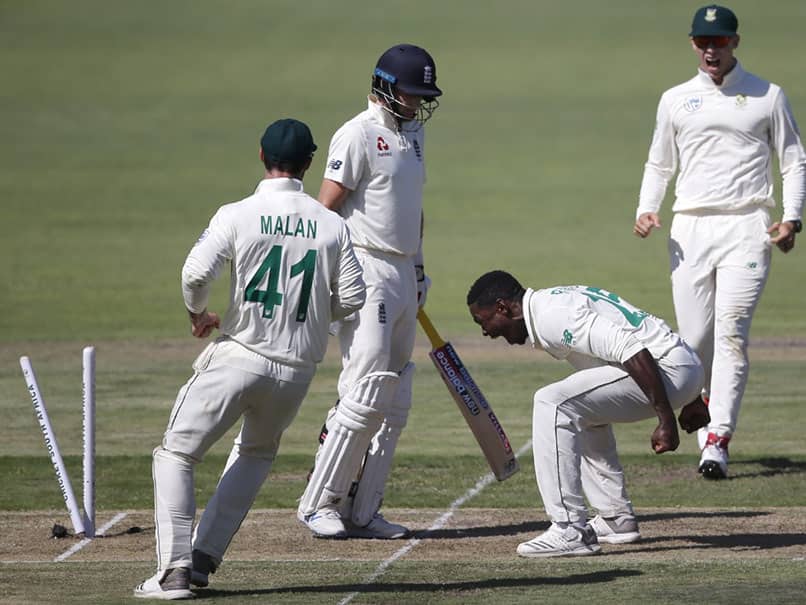 Kagiso Rabada removed Joe Root on Day one of the third Test.© AFP

The International Cricket Council (ICC) on Friday handed one-match ban to South Africa fast-bowler Kagiso Rabada following his celebration after removing England captain Joe Root in the ongoing third Test. As a result, Kagiso Rabada is now set to miss the final Test of the four-match series. After the first Day's play on Thursday, Kagiso Rabada admitted to the offence as he copped a demerit point for his gestures on the field. After the ban, former England captain Michael Vaughan took to Twitter to express his views and called the decision "absolutely bonkers".

"Rabada getting a 1 game ban for celebrating taking the Wicket of the opponents best player is absolutely bonkers ... Over rates & slow play nothing gets done ... Celebrate a wicked and you are banned ... The World is bloody nuts ... #SAvENG," Michael Vaughan tweeted.

Rabada getting a 1 game ban for celebrating taking the Wicket of the opponents best player is absolutely bonkers ... Over rates & slow play nothing gets done ... Celebrate a wicked and you are banned ... The World is bloody nuts ... #SAvENG

Another former England captain Nasser Hussain also voiced his opinion on ICC's decision and said that "Wanderers Test will be poorer" without Rabada.

Context .. 33 degree heat.. high humidity.. flat pitch ... not given new ball .. gets England captain .. best ball of the day ... shows a bit too much emotion. Result Wanderers test will be poorer for no Rabada .. ps I know he has previous !

On Day 1, South Africa managed to pick four wickets before stumps after England openers provided a solid start for the visitors.

England were 117 for two at tea after captain Joe Root won the toss and decided to bat on a placid pitch on a hot, sunny day.

Zak Crawley and Dom Sibley gave England a solid start, reaching lunch at 61 for no wicket.

But South Africa came back strongly, dismissing both opening batsmen in similar circumstances and keeping a tight rein on the scoring rate after lunch.

Kagiso Rabada had Sibley caught at backward square leg for 36 and Anrich Nortje had Crawley caught in the same position for 44.

Kagiso Rabada Michael Vaughan Cricket
Get the latest updates on India vs England Series, India vs England , live score and IPL 2021 Auction . Like us on Facebook or follow us on Twitter for more sports updates. You can also download the NDTV Cricket app for Android or iOS.