Sourav Ganguly celebrated his 48th birthday on Wednesday and Cricket Australia shared a special video to extend their wishes to former India skipper. 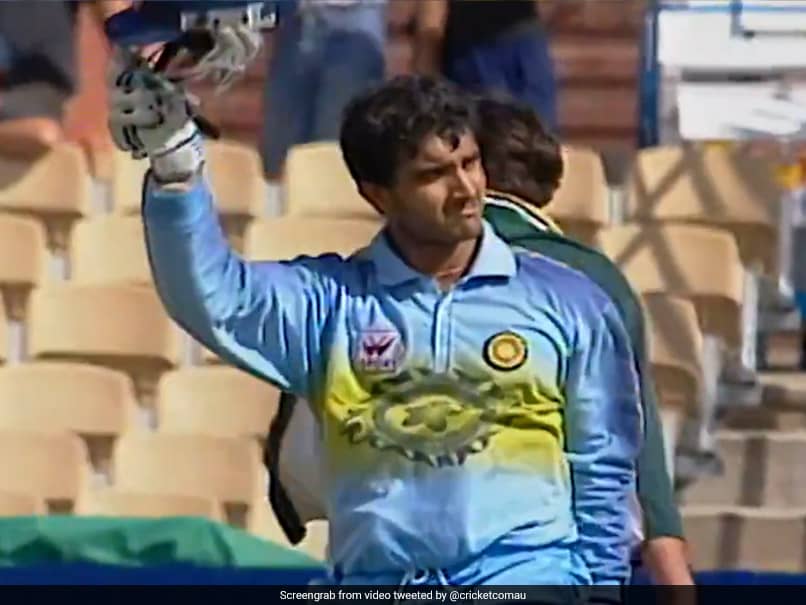 Sourav Ganguly smashed 141 against Pakistan in Adelaide in 2000.© Twitter

Sourav Ganguly, former India captain and current Board of Control for Cricket in India (BCCI) president, turned 48 on Wednesday and the cricket fraternity flooded social media with heart-warming wishes for the former left-handed batsman. Cricket Australia took to Twitter to pay a special tribute to Sourav Ganguly by sharing a video of one his iconic knocks that came against arch-rivals Pakistan. The video was from a One-Day International from a triangular series featuring India, Pakistan and Australia. The match was played in Adelaide in 2000 where the former India skipper smashed 141 runs against a formidable Pakistan bowling attack.

"Happy birthday! to @SGanguly99, who had a day out in Adelaide in 2000, scoring 141 against an attack featuring Wasim Akram, Shoaib Akhtar and Saqlain Mushtaq," Cricket Australia captioned the video on Twitter.

Happy birthday! to @SGanguly99, who had a day out in Adelaide in 2000, scoring 141 against an attack featuring Wasim Akram, Shoaib Akhtar and Saqlain Mushtaq! pic.twitter.com/MwCkhEa8Eo

In that match, Sachin Tendulkar was captaining the side and Ganguly, who came to open the innings, ended up as the leading run-scorer with a knock of 141 that included 12 boundaries and a six.

Ganguly's hundred in the match helped India set Pakistan a challenging target of 268.

In reply, Pakistan were bowled out for 219, falling 48 runs short of the target.

Ganguly ended the tri-nation series as the leading run-getter for India, scoring 356 runs at an impressive average of over 50.

Ganguly, during his 16-year-long international career, went onto to represent the country in over 100 Tests.

Sachin Tendulkar Shoaib Akhtar Wasim Akram Cricket
Get the latest updates on IPL 2021, IPL Points Table , IPL Schedule 2021 , live score . Like us on Facebook or follow us on Twitter for more sports updates. You can also download the NDTV Cricket app for Android or iOS.