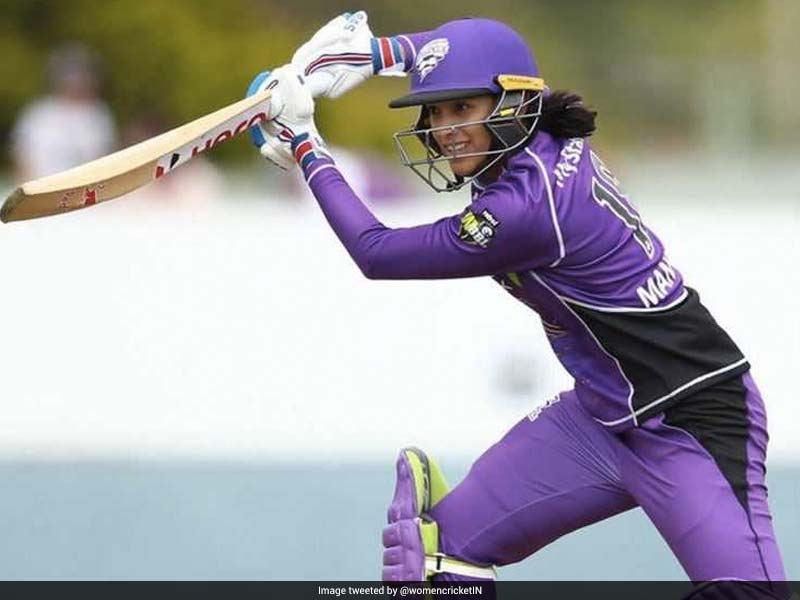 Smriti Mandhana was part of the Indian team that reached the semi-final in the ICC World T20 2018.© Twitter/@womencricketIN

Smriti Mandhana isn't just popularfor her exploits in the Indian women's team jersey. The expert T20 batter is currently busy setting the Women's Big Bash League (WBBL) on fire, and a video showing her blast the opposition bowlers is doing the rounds on Twitter. Mandhana, who plays for the Hobart Hurricanes, smashed a 22-ball 35, which comprised some mind-numbing big-hitting. Mandhana generally opens the batting for the Hurricanes with Erin Fazackerley, and in Monday's game versus Sydney Thunder Women, she helped her side set a competitive 136-run target.

Here for a good time, not a long time! A quick-fire 35 off 22 from Smriti Mandhana saw some big hitting from the @HurricanesWBBL superstar! #WBBL04 pic.twitter.com/oJ375ltewu

Another Indian batter who is a prominent name in the Women's Big Bash League is Harmanpreet Kaur, who plays for the Sydney Thunders. Barely days ago, both of them were in the spotlight when 29-year-old Harmanpreet had taken a brilliant catch just on the edge of the circle to dismiss Mandhana after a quick-fire 29. After taking the catch, Harmanpreet did not celebrate.

Recently, Smriti Mandhana and Harmanpreet Kaur were involved in a war of words with Indian veteran batswoman Mithali Raj, who was dropped by Kaur for the ICC World T20 semi-final match against England, which India lost by a gaping margin. The war of words reached a point that the then India women's team coach Ramesh Powar and the Board of Control for Cricket in India (BCCI) had to join the debate.

Hobart Hurricanes Smriti Mandhana Cricket
Get the latest updates on ICC T20 Worldcup 2022 and CWG 2022 check out the Schedule, Live Score and Medals Tally. Like us on Facebook or follow us on Twitter for more sports updates. You can also download the NDTV Cricket app for Android or iOS.