The three-team event which starts on November 4 will see each team playing one match against each other and the top two sides will play the final on November 9. 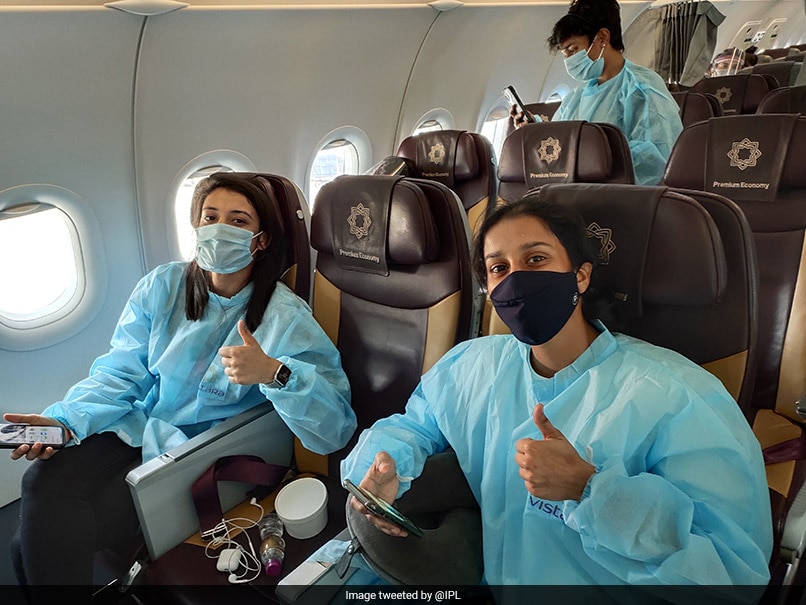 Smriti Mandhana and Jemimah Rodrigues posed for a picture inside the flight.© Twitter

Indian women cricketers covered in PPE kits arrived in the United Arab Emirates (UAE) to take part in the Women's T20 Challenge on Thursday. The Indian Premier League's (IPL) official Twitter handle shared a few pictures of Indian T20 skipper Harmanpreet Kaur, ODI captain Mithali Raj, veteran fast bowler Jhulan Goswami, opener Smriti Mandhana and Jemimah Rodrigues, among others. The three-team event will be played between November 4 and 9, during which each team will play one match against each other, with top two sides playing the final. All these matches will be played at a single venue, with Sharjah's iconic stadium staging all four games.

Let's hear it for our girls!

The #Supernovas, #Trailblazers, #Velocity have arrived.

This year's event will not see some of the big names of women's cricket take the field, with the most notable ones being from world champion Australian side, as they will be taking part in the Women's Big Bash League, which starts on October 25 and will run until November 29.

The Board of Control for Cricket in India (BCCI) announced the three squadswhich includes players from England, Sri Lanka, New Zealand, South Africa and the West Indies.

Smriti Mandhana will lead the Trailblazers, while Harmanpreet Kaur, and Mithali Raj will be leading the Supernovas and Velocity teams respectively.

India Women Smriti Mandhana Harmanpreet Kaur Mithali Raj Jhulan Goswami Cricket
Get the latest updates on Fifa Worldcup 2022 and check out  Fifa World Cup Schedule, Stats and Live Cricket Score. Like us on Facebook or follow us on Twitter for more sports updates. You can also download the NDTV Cricket app for Android or iOS.