The ball landed outside the pitch area and strangely enough the umpire deemed it to be a legal delivery much to the anger of Australian fans on Twitter. 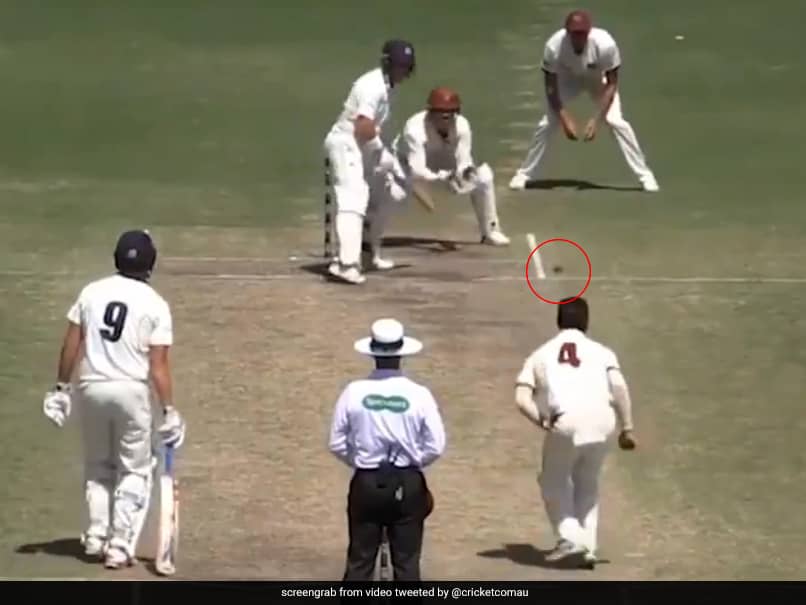 Mitchell Swepson got the ball to land outside the pitch area in a Sheffield Shield match.© Twitter

Sheffield Shield, Australia's domestic first-class cricket competition, has witnessed some rather strange incidents, some rarely seen previously on a cricket field. On Tuesday, the match between Victoria and Queensland at Junction Oval saw another extraordinary incident unfold. Mitchell Swepson, leg-spinner playing for Queensland, pitched his delivery outside the pitch area and strangely enough the umpire deemed it to be a legal delivery much to the anger of Australian fans on Twitter. Even the commentators were left bemused by the delivery as well as the umpiring.

"That landed off the wicket. That's a no-ball. That did not land on the pitch. That landed outside the return crease, so that's a no-ball. That's not even a hard decision. You can't bowl it there. How has he (umpire) let that go. It completely confused me. It was almost as if it's a practice ball," the two commentators said during a conversation with each other on-air.

Here is the video of the bizarre moment from the JLT Sheffield Shield match:

Australian fans were not too impressed with the umpiring and let their feelings known.

That's what they said. Either way, it wasn't called.

The standard of umpiring is getting worse...

The umpiring at all levels is the worst it has ever been. I don't think you will see the two that officiated in this game EVER again!!! Had absolute stinkers.

21.7 BALL PITCHING OFF THE PITCH

The umpire shall call and signal No ball if a ball pitches wholly or partially off the pitch before it reaches the line of the striker's wicket.

Once again just shows how poor the umpiring is

Who do I see to get a game umpiring state cricket? If this is the standard Im ready now!

Any chance of seeing the captains reports on the umpires at this game @White_Adam ? Been some amazing calls!

Geez the umpires in this game had a shocker

On the match front, Victoria beat Queensland thanks to a brilliant batting performance from opener Marcus Harris. The 26-year-old had scored a fine 95 in the first innings and followed it up with what he described as his "best innings" -- a knock of 174 runs off 197 balls.

Victoria were set 300 for victory by Queensland off the final 78 overs, ultimately chasing down the target with three wickets and 4.4 overs to spare.

"To win the game, and on a wicket like that, that's probably my best innings," Harris was quoted as saying by cricket.com.au.

"My 250 was good but that was obviously different circumstances. What you want to do as a cricketer is play a match-winning innings."

Australia Cricket Team Marcus Harris Mitchell Swepson Cricket
Get the latest updates on India vs Australia Series, check out the India vs Australia Schedule for 2020-21 and Ind vs Aus live score . Like us on Facebook or follow us on Twitter for more sports updates. You can also download the NDTV Cricket app for Android or iOS.