Shahid Afridi was in scintillating form, smashing an unbeaten 81 off just 40 balls as Brampton Wolves beat Edmonton Royals by 27 runs. 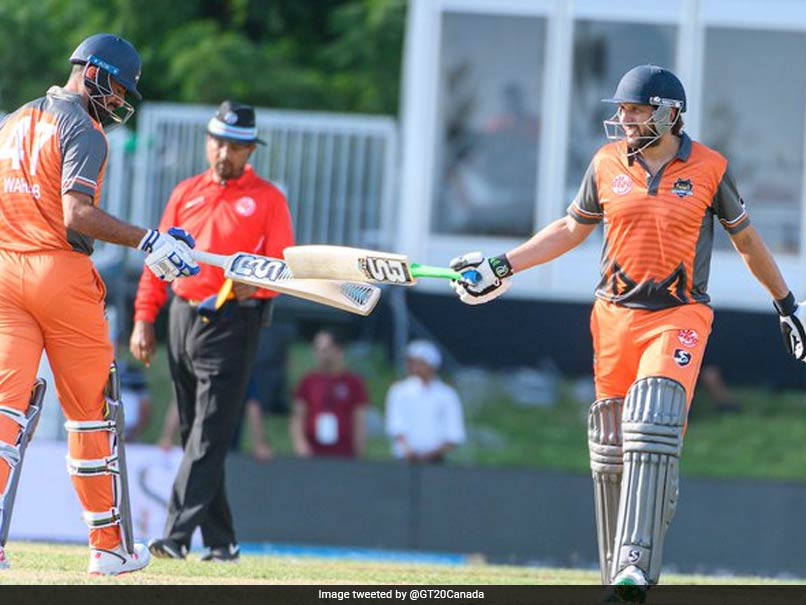 Shahid Afridi came up with a hilarious reply to Wahab Riaz's request for a second run.© Twitter

Shahid Afridi turned back the clock with a sensational unbeaten 81-run knock off just 40 balls in Brampton Wolves' 27-run win over Edmonton Royals in a Global T20 Canada encounter at the CAA Centre in Brampton on Sunday. But that was not the only talking point of the game. An incident involving Afridi on the final ball of Brampton Wolves' innings has gone viral on social media. Batting with compatriot Wahab Riaz, Afridi hit the last ball for a single down to long-off, Wahab Riaz asked his partner if he wanted to take a second run. Afridi came up with a hilarious reply that quickly started doing the rounds on various social media platforms.

Afridi smashed 10 boundaries and five sixes in his fiery knock that propelled Brampton Wolves to 207 for five in 20 overs.

Not only did Shahid Afridi shine with the bat but he also claimed the wicket of compatriot Mohammad Hafeez.

Shahid Afridi was named Man of the Match.

Brampton Wolves and Shahid Afridi will be next seen in action on Thursday when they take on Winnipeg Hawks.

Wahab Riaz Cricket
Get the latest updates on IPL 2021, check out the IPL 2021 Schedule and Indian Premier League Live Score . Like us on Facebook or follow us on Twitter for more sports updates. You can also download the NDTV Cricket app for Android or iOS.