"We Are Here": Sachin Tendulkar Responds To Major Throwback Pic

When Sachin Tendulkar and Vinod Kambli were found missing from a team photo in their state outfits, Tendulkar was quick to let his whereabouts known. 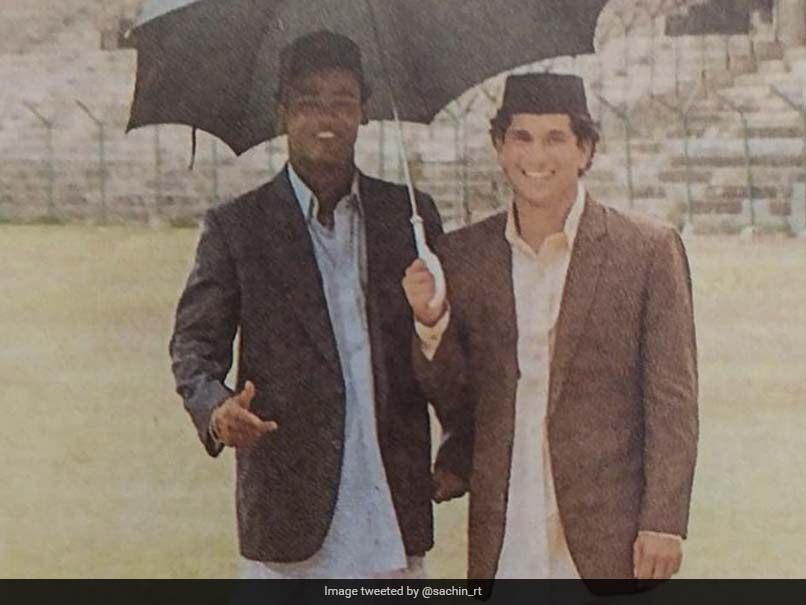 Sachin Tendulkar and Vinod Kambli have been long-time teammates and friends. Their camaraderie was on display one fine day in 1993 when the duo dressed up in ethnic Indian wear for a team grouping. Cricket commentator Harsha Bhogle posted a picture of this grouping on social media and asked, “How many of you can get all of them?” WV Raman, part of the India team at the time and in the picture, pointed out the players who were missing. “The missing ones are @sachin_rt and @vinodkambli349,” Raman commented on the post.

The missing ones are @sachin_rt and @vinodkambli349

Tendulkar was quick to notice that he was found missing and revealed his whereabouts with a picture where he is seen posing with Kambli, who is holding an umbrella.

The caption in Marathi translated to “We are here.”

The star-studded picture had Raman, Kapil Dev, Navjot Sidhu, Kiran More, Anil Kumble, Venkatpathy Raju, Mohammad Azharuddin among others and all of them were dressed in ethnic Indian wear from their part of the country.

When a journalist enquired about the occasion of such an emphatic coming together of stars, Raman recalled the occasion: “The broadcaster wanted to do a AV for the Independence day in 1993..We were leaving to SL around June /July.”

Tendulkar, all of 20 at the time, sported a cherubic smile alongside his mate Kambli, with whom he put up an epic 664-run partnership in school cricket in 1988.

Sachin Tendulkar Vinod Kambli Harsha Bhogle Cricket
Get the latest updates on ICC T20 Worldcup 2022, check out the Schedule and Live Score. Like us on Facebook or follow us on Twitter for more sports updates. You can also download the NDTV Cricket app for Android or iOS.