Sachin Tendulkar took to Twitter to congratulate Lionel Messi and Argentina on their Copa America win, and also tweeted some comforting words for Neymar and Brazil. 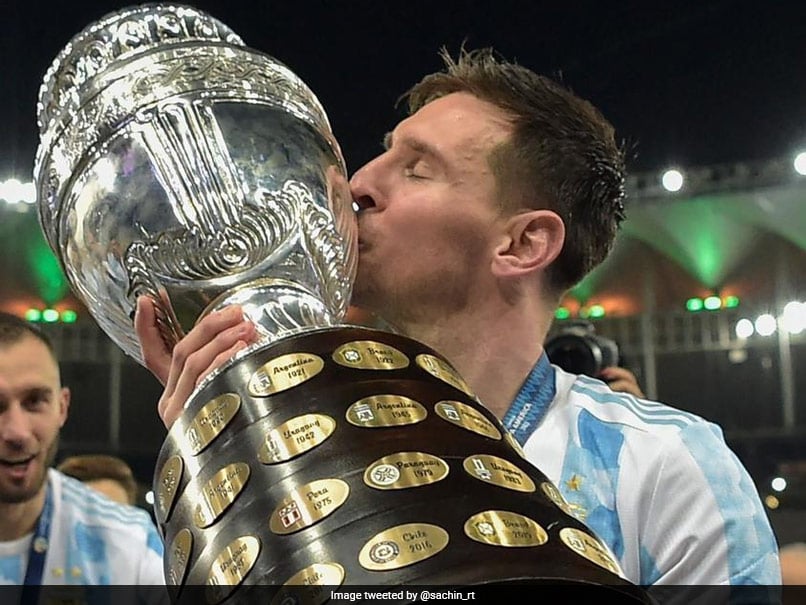 Sachin Tendulkar on Sunday congratulated Lionel Messi and his national football team Argentina on winning the Copa America final against Brazil. In a tweet, the former India cricketer called the win "historic" for all Argentinians and an "icing on the cake" for Messi, who, he added, should continue inspiring everyone with his unbelievable skills on the football pitch. Tendulkar shared a few images from the game that showed the Argentina team celebrating, while he also had some comforting words for Brazil star Neymar who was in tears following the loss. "Heartiest congratulations to @Argentina on winning the #CopaAmericaFINAL," said Tendulkar.

Heartiest congratulations to @Argentina on winning the #CopaAmericaFINAL.
It is a historic win for all the Argentinians, and is an icing on the cake for Messi who has had such a stellar career. Continue inspiring. pic.twitter.com/5oaxHf1A1N

In a second tweet, which accompanied Neymar's images, Tendulkar wrote, "The pain of losing a final is understandable. But this is just a bend in the road, not end of the road for @neymarjr & @CBF_Futebol."

He added that Brazil will "bounce back stronger and do themselves proud".

The pain of losing a final is understandable. But this is just a bend in the road, not end of the road for @neymarjr & @CBF_Futebol.
They'll bounce back stronger and do themselves proud. pic.twitter.com/K6B8tLT4WP

The victory was special for Messi as it ended his agonising wait for a major international trophy with his national side. It also ended Argentina's 28-year-long title drought as the side last won an international tournament (Copa America) in 1993.

After the side led by Kapil Dev brought the World Cup home in 1983, it was only in 2011 that the Indian side led by MS Dhoni won it again. Tendulkar played in the 2011 side.

Indian Premier League team Kolkata Knight Riders too wished Messi and his teammates, sharing an image of the Argentinian squad lifting the trophy.

The 28-year drought comes to an end.
Argentina! #CopaAmericaFINAL pic.twitter.com/EI9oouhx5F

Argentina beat Brazil 1-0 at the Maracana Stadium in Rio de Janeiro. The only goal scored in the final was by Angel Di Maria, in the 22nd minute.

After the final whistle, Neymar was heartbroken. He, however, walked up to the winning camp and embraced Messi - his former Barcelona teammate - who tried consoling him.

Lionel Messi Cricket
Get the latest updates on IPL 2021, check out the IPL 2021 Schedule and Indian Premier League Live Score . Like us on Facebook or follow us on Twitter for more sports updates. You can also download the NDTV Cricket app for Android or iOS.