Lionel Messi used his right arm to keep his celebrating Argentina teammates away from Neymar while continuing to console the heartbroken Brazilian. 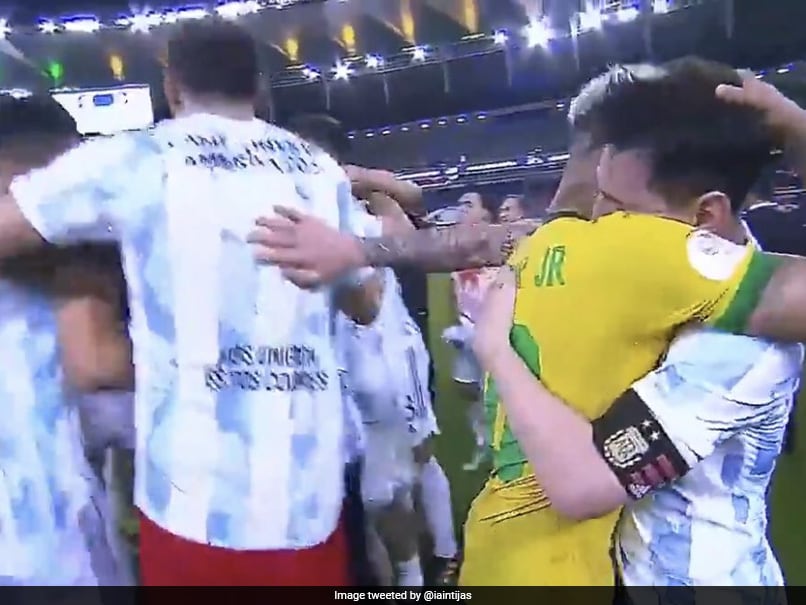 Lionel Messi's agonising wait for a trophy with his national team ended on Sunday (IST) as Argentina beat Brazil 1-0 in the final to win the Copa America title. Messi had won the Olympic gold medal with Argentina but a senior international trophy had eluded him. All that changed as Angel Di Maria scored the only goal of the Copa America final that ended Argentina's 28-year wait for a major trophy. Quite understandably, Messi celebrated wildly with his Argentina teammates but there came a moment which will forever be etched in the minds of football fans all over the world.

After the final whistle, Brazil star Neymar was seen walking towards the celebrating Argentine camp, looking for Messi -- his former Barcelona teammate. The moment they spotted each other, the duo embraced each other, with Messi consoling his Brazilian counterpart.

But the viral moment came when Messi used his right arm to keep his celebrating Argentina teammates away from Neymar while continuing to console the heartbroken Brazilian.

Argentina had last tasted success at a major tournament in 1993 when the great Gabriel Batistuta's brace gave them a 2-1 win over Mexico in the Copa final in Ecuador.

It was the first time in six editions playing at home that Brazil had failed to lift the trophy.

While Messi's trophy jinx with Argentina finally ended, Neymar is still without a major title at international level having missed Brazil's win on home soil two years ago through injury.

Lionel Messi Neymar Football
Get the latest updates on ICC T20 Worldcup 2022 and CWG 2022 check out the Schedule, Live Score and Medals Tally. Like us on Facebook or follow us on Twitter for more sports updates. You can also download the NDTV Cricket app for Android or iOS.